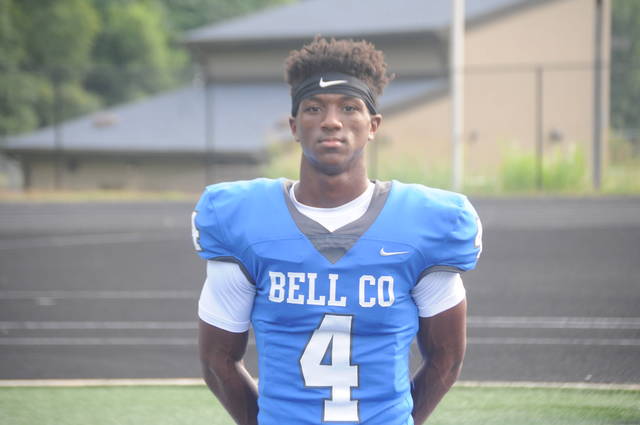 London Stephney was named the Class 3A District 5 Player of the Year by the Kentucky Football Coaches Association. He has helped lead Bell County to an undefeated regular season and two home playoffs victories.

Bell County senior quarterback London Stephney was named the Class 3A District 5 Player of the Year by the Kentucky Football Coaches Association. He helped lead the Bobcats to an undefeated regular season and to two post season victories to this point this season.

This year, Stephney has eclipsed the century mark through the air throwing for 1,341 yards and 16 touchdowns while completing 63 percent of his passes. He only has three interceptions on the season.

Just as effective on the ground, the senior standout has rushed for 920 yards and 14 touchdowns on 84 carries. He currently averages 76.6 rushing yards per game.

Last season as a junior and in his first year with the Bobcats, Stephney electrified crowds with his quickness and athletic ability.

During the 2018 season, Stephney racked up 806 yards passing with 15 touchdowns to only a single interception. He also rushed for 1,128 yards and 15 touchdowns.

In the opening round of the KHSAA 3A playoffs against Garrard County, Stephney accumulated five total touchdowns. He went 7-of-8 through the air for 165 yards and four touchdowns. He also added 21 yards on the ground and another touchdown.

Having been named the district player of the year, Stephney credits his teammates with allowing him to be able to perform at the level he has.

“It feels great to be the district player of the year,” said Stephney. “But, it wasn’t possible without my guys on both sides of the ball, God and our amazing coaching staff. We wouldn’t be where we are without every man on this team.”

Stephney believes that relaxation and focus are what allows him to prepare for his games.

“When I’m preparing for the games I like to go home and eat with the family,” he said. “Then I go take a nap before going back up to the school. I’ll just vibe with my music while I get ready. What allows me to perform well is just having the right mindset. Before every game, we go in knowing the other team’s defense and offense. We prepare hard.”

With the a third round the playoff match-up with Fleming County looming, Stephney and his team are still working toward the goal of winning a state championship.

“The season has been great. We just have to stay focused and work hard for what we know we want to accomplish,” he said. “What we want to accomplish is winning it all and getting a state championship ring — that’s the ultimate goal. We all know what type of work it takes to get that, and we’re up for the challenge.”

Coach Dudley Hilton says that Stephney’s leadership ability has helped the team a lot this season.

“He has done a lot of things for us this season,” said Hilton. “Our team has played great as a whole. Football is a team sport, and it takes every piece working together to get the job done. London does a great job leading the team by doing what he’s supposed to do. He is a great player.”