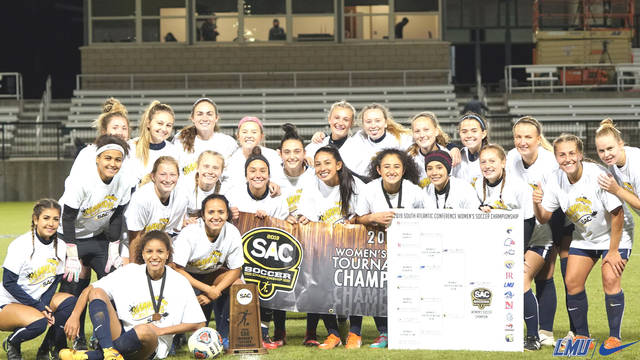 The LMU women’s soccer team claimed their second straight SAC tourney title on Sunday with a 1-0 victory over Wingate.

In order to claim the South Atlantic Conference Tournament championship for the second consecutive season, the fifth-seeded Lincoln Memorial University women’s soccer team had to go through three higher seeds in No. 4 Catawba, No. 1 Lenoir-Rhyne and second-seeded Wingate.

The Lady Railsplitters took down the Indians first at their place before clawing past the regular-season champion Bears and putting the finishes touches on their trip to Matthews, N.C., Sunday with a gritty 1-nil victory over the Bulldogs to keep the bragging rights as champions.

The win gives LMU its third SAC Tournament championship since 2007 as the Lady Railsplitters allowed just one goal through the three-match span, while shutting out Lenoir-Rhyne for the second time this season followed by its shutout of Wingate.

“Great effort and great tactical discipline,” LMU head coach Sean Fraser said. “We worked on the most important things out of possession and discussed the importance of a game plan that prioritized space! The five goals we scored in the tournament are all pure class, and in my opinion we played the three toughest teams again like last year. I’m so proud of our kids; they’ve done the institution proud.”

With the SAC Tournament championship, the Lady Railsplitters (16-4) get an automatic bid into the NCAA Division II Women’s Soccer Championship and will find out their fate at 6 p.m. Monday when the selection show airs.

The shots were nearly even across the board as the Bulldogs (13-4-2) had one more shot than LMU in a 9-to-8 differential, but Thenia Zervas — the SAC Tournament Most Valuable Player — made sure to make her shot count.

After Daisy Drake was fouled just outside the box in the 23rd minute, Zervas set up for the free kick and all it took was one touch as it swished up and through the left corner to give the Lady Railsplitters the only goal they would need to re-claim the SAC Tournament championship.

“We have practiced that specific situation a lot of times so I knew exactly what I had to do in order to help my team score,” Zervas said. “I was very happy and excited. My family was watching from Greece, so I ran to the camera and made a heart in honor of them. I also want to thank my teammates and coaches for the effort this weekend.”

Through her first tournament as a JUCO transfer, Zervas scored a pair and passed across an assist to improve her to five goals and 17 assists on the season. Also, on the SAC All-Tournament team was Ermelinda Pantaleao, Graciela Palencia and Maria Hernandez.

‘Thenia was and is absolutely fantastic,” Fraser said, “we’re still working on improving her but you can just see what it means to her with the assist and celebrations on Jessica’s goal Friday, and then the goal she scored today. I’m excited she’s gotten some recognition; she’s done us proud so far.”