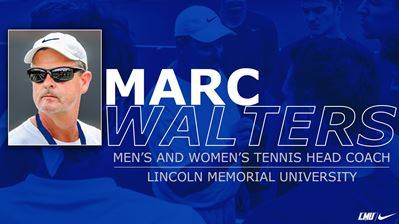 HARROGATE, Tenn. — The search for a men’s and women’s tennis head coach at Lincoln Memorial University is now complete with the LMU athletics department announcing the appointment of Marc Walters to lead its men’s and women’s tennis programs Friday. A veteran tennis coach, Walters has nearly a quarter-century of collegiate head coaching experience and owns 639 match wins at the NCAA Division I and II levels.

“I am truly humbled and very grateful to Dr. Jody Goins and Cameron Whicker for this opportunity to come coach at Lincoln Memorial University,” stated coach Walters. “It is such an exciting tennis landscape with first-class facilities, athletic support and an amazing array of professional and undergraduate educational degree programs. I know this position was one that drew quite a bit of attention in the past six months among my peers, as we all know this is a place where success and achievement will be attainable on a high level.”

Recently wrapping up the fall portion of his eighth year at West Virginia Wesleyan, Walters led the Bobcats program through their best stretch in school history and took the women’s team to outstanding heights during his time in Buckhannon, West Virginia. He guided the men’s team to seven-straight NCAA Tournaments and compiled an overall record of 178-98 (.644) from 2013-19.

“We are elated to bring Marc into the LMU family as our head tennis coach,” spoke Director of Athletics Jasher Cox. “He brings a vast amount of experience coaching and developing top tennis talent. At each of his previous stops, Marc was able to build his teams into nationally-recognized programs. His development of players at both the Division I and Division II levels, coupled with his academic success as a coach, made him a top candidate for our position.”

A Morgantown, West Virginia, native, Walters has 23.5 years of head coaching experience and brings a 639-328 (.663) career coaching record to LMU. Prior to his time guiding West Virginia Wesleyan, Walters built nationally-ranked programs at Barton College, where both of his teams achieved top-25 rankings, and Nebraska-Kearney. Before heading to Buckhannon, West Virginia, Walters served as the head women’s coach at Division I West Virginia from 2006-2010, leading his 2010 team to a program-best No. 7 regional ranking.

He has served on the NCAA and Intercollegiate Tennis Association (ITA) regional committees, the ITA Awards Committee and is a current member of the ITA National Rankings committee. Walters has also directed five ITA Championship events, including the 2018 ITA Men’s Atlantic Regional.

“The hiring committee here was incredible to work with,” said Walters. “I can already feel the influence they will have in helping us put the program into conference and national prominence.”

“I have always been a community tennis development type of coach at my previous positions and many of those were smaller, rural areas without a tennis footprint,” Walters added. “Community tennis involvement is a big reason why my college programs have been successful, with each feeding off the other.”

Surpassing the 625-win mark last spring, Walters led the West Virginia Wesleyan men’s team to a final national ranking of No. 50, both the MEC regular season and MEC Tournament titles for the third consecutive year, and a NCAA Tournament first round victory. As the 2019 squad reached a season-high national ranking of No. 34, it marked the first time in program history the men closed out the season nationally ranked in back-to-back seasons and just the third time the Bobcats appeared in the final national rankings. Walters earned the MEC Coach of the Year award for the third time and the team had a MEC-record six all-conference selections, including MEC Freshman of the Year Christos Kyrillou. West Virginia Wesleyan had three All-MEC First Team selections for the fourth-straight season as Maycon Dias, Carlos Dodero, and Lukas Laipold made the cut, giving Walters a total of 18 All-MEC First Team picks in seven seasons.

Individually, Dias and Dodero finished the year with a national doubles ranking of No. 29 after reaching a season-high ranking of No. 19 in March. The Bobcats’ 17 wins marked the fifth time in Walters’ tenure the program topped 16 victories as he guided West Virginia Wesleyan to its 11th-straight NCAA Tournament appearance.

The 2019 Walters-led Lady Bobcat program jumped two spots in the MEC conference with a second-place tie in the final regular season standings, not to mention achieving West Virginia Wesleyan’s highest regional ranking in 10 seasons at No. 7. The Lady Bobcats’ 14 wins were also the most since 2009 and the team capped off the year with a 3.69 team grade point average, which was the highest GPA in the athletic department for the fourth year. Placing five players on the ITA All-Academic list, West Virginia Wesleyan had an All-MEC First Team performer in senior Mariona Junyer and three total all-conference selections with Cecilia Martinez and Julia Yanes earning All-MEC recognition as well.

Under Walters’ leadership at West Virginia Wesleyan, the Bobcats had no shortage of individual honors as Aitor Reparaz and Joel Izquierdo won the 2014 ITA Atlantic Regional doubles title, earning a No. 8 national ranking. Three of his players won MEC Player of the Year awards – Paula Pimenta (2013), Izquierdo (2014) and Maycon Dias (2018) – and in addition to Kryrillou in 2019, Pimenta (2013), Heigermoser (2017), and Dias (2018) each earned MEC Freshman of the Year honors. Izquierdo was named 2014 ITA Outstanding Senior Player of the Year, while Pimenta was the 2017 ITA Arthur Ashe Award winner. With Walters at the helm, 38 Bobcats earned All-MEC plaudits and West Virginia Wesleyan saw 23 different players and doubles teams earn ITA rankings.

A 1987 graduate of Fairmont State University, where he earned his Bachelor of Science degree, Walters received his Master of Science degree in sport administration and athletic coaching from West Virginia in 1992.

“LMU got a great coach with the hiring of Marc Walters. Marc is an incredible leader and brings high energy with him to LMU. It has always been an adventure competing against Marc’s teams over the years. He will represent LMU with the utmost class and his teams will do the same.”

“In the years I’ve known Marc, he has fielded some exceptionally competitive teams and has a knack for inspiring his players to play consistently at a level even higher than their talent. His teams have always reflected his leadership, acting with class and taking great pride and joy in the opportunities put in front of them. I’m very excited to have him coming aboard at LMU as another extremely competitive regional rival that will continue to strengthen the level of the NCAA Southeast Region. I have no doubt that under his guidance, both LMU programs will make a major impact on the national scene here in the near future.”

“Marc will do great things at LMU as he builds strong teams year in and year out and runs them the right way. He will lead a team to watch out for in an already tough conference.”

“Marc has done a tremendous job coaching in the MEC. I’m sure he will be successful at LMU.”

Kentucky heads south for its final road trip of the regular season, making the three-hour trek to Music City to... read more