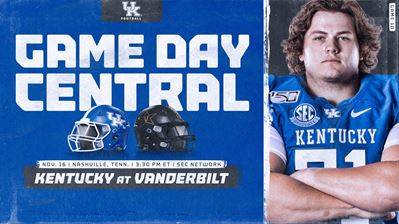 Kentucky heads south for its final road trip of the regular season, making the three-hour trek to Music City to take on Vanderbilt.

Kentucky heads south for its final road trip of the regular season, making the three-hour trek to Music City to take on Vanderbilt. The game is set for a 3:30 p.m. ET kickoff and will air on the SEC Network.

The Cats are coming off a gut-wrenching 17-13 loss to Tennessee that saw the team come within a yard of scoring the go-ahead touchdown in the final 90 seconds of regulation. With three games remaining the Cats need two victories to reach bowl eligibility for the fourth consecutive season.

Despite the loss last weekend, junior Lynn Bowden Jr. continued to dazzle as the starting quarterback, rushing for 114 yards. He has three 100-yard rushing performances in four starts since moving over from wide receiver and his 613 rushing yards are the most for a UK player in a four-game stretch since Moe Williams in 1995.

The UK defense also has shown stark improvement and continues to give the team a chance to win despite its inexperience on that side of the ball, particularly in the secondary. It has held four consecutive SEC opponents to 305 total yards or less, the best such stretch since 1979, and allowed just three total first half points the past three games.

• The Commodores are coming off a loss at Florida.

• The Commodores, like UK, have started three different players at quarterback this season.

• Florida held the ‘Dores in check offensively as Deuce Wallace made the start under center.

• Vaughn has been sensational, averaging 118.4 all-purpose yards per game. He also has caught 24 passes to go along with his exploits on the ground.

• Defensively, the Commodores are allowing 465.5 total yards per game this season.

• Linebacker Dimitri Moore leads the team with 71 total tackles, including 5.5 tackles for loss.

• Linebacker Andre Mintze has 4.0 of the team’s 13 sacks on the season.

• UK has won the past three meetings and four of the past five.

• UK has held Vanderbilt to 22 points or less in each of the past five meetings.

• The first meeting between the schools came in 1896, a 6-0 Vanderbilt win in Nashville. Of SEC teams, only the Tennessee series dates back further (1893).

• Throughout the series’ history it has typically featured close outcomes. Thirty-seven meetings have been decided by a touchdown or less in the series, including three of the past four.

• The series has had three scoreless ties in its history.

• UK coach Mark Stoops is 4-2 vs. Vanderbilt during his tenure.

• Last season, UK won a 14-7 defensive battle that saw the Cats score the winning touchdown with 8:04 remaining in the game. • The Cats outrushed Vanderbilt 280-68 in the game and have piled up an average of 256.7 rushing yards per game vs. Vanderbilt in the past three meetings. The lowest total is 232 rushing yards over that span. The Commodores have 128 total rushing yards the past two meetings.

• Vanderbilt has one player from Kentucky: OL Saige Young (Versailles).

A UK Win Would…

• Extend UK’s winning streak in the series to four games and five of the past six overall.

• Be UK’s second straight win in the series in Nashville.

• Be UK’s ninth road win in the past four seasons.

• Put the Cats within one win of bowl eligibility with two games remaining.

• Be the Cats’ 17th win against SEC foes under Stoops.