Bulldogs gets offensive in 102-71 AAC victory 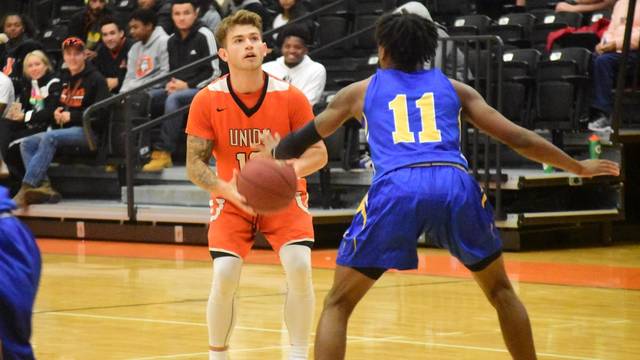 Union heads back to Barbourville to face St. Andrews University (N.C.) in AAC play on Saturday. Tipoff is set for 4 p.m.

Richard Brown led all players in scoring with 26 points and added four blocks, while Austin Cummins followed with 17 points and two rebounds. Two other Bulldogs scored in double figures. Jakobe Wharton had had 15 points, and Nick Marshall had 10.

Union went on a 12-0 run to take the lead including back-to-back 3s from Cummins and Wharton. The Knights would not take the lead back for the rest of the game.

The Bulldogs pulled even further away in the second half taking a 31-point lead and scoring over 100 points for the first time this season.

Derek Morgan came off the bench and chipped in nine points, three steals, and two blocks.

Union won the battle of the boards, outrebounding Kentucky Christian 37-24. The Bulldogs pulled down 25 defensive boards to the Knight’s 16.

Cole Gilliland paced KCU with 14 points, while Domonique Mitchell was next for the Knights with 12 points.

It was a Bulldog block party as Union blocked eight shots on the night.

BULLDOG ON THE GAME

Richard Brown was all over the place for the Bulldogs. The Senior forward had 26 points, nine rebounds, four blocks, and one steal.

Union heads back to Barbourville to face St. Andrews University (N.C.) in AAC play on Saturday. Tipoff is set for 4 p.m.