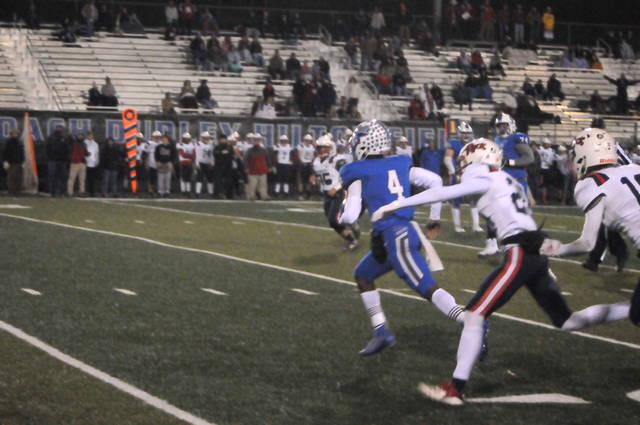 London Stephney cuts up field for a touchdown against Rockcastle County on Friday night.

The Bell County Bobcats handled business against the Garrard County Golden Lions last week and earned their way into the second round of the KHSAA class 3A playoffs against the Rockcastle County Rockets this week on Log Mountain.

The Bobcats got off to a slow start, but just before the end of the first quarter began to pour on the points in what would turn into a 39-0 rout of the visiting Rockets. With the victory, Bell County improves to 12-0 on the season and advances to the third round of the KHSAA class 3A playoffs.

With each team trading possessions for the majority of the quarter, the Bobcats hit pay dirt on a 20-yard passing touchdown from London Stephney to Jason Jones. The 2-point conversion was no good, leaving the Bobcats with a 6-0 lead just before the second quarter.

Again, the Bobcats stalled the Rockets’ offense, limiting them to less than 35 yards on their initial possession of the second quarter. After regaining possession, Bell County added their second touchdown of the game on a 31-yard rushing touchdown by William Dean, extending the Bobcats’ lead to 12-0 after an unsuccessful 2-point conversion with 8:56 remaining before the half.

Each team traded a pair of possessions with Bell County regaining the ball around the Rockcastle 45-yard line. Two plays later, Brandon Baker dashed into the end zone for the Bobcats’ third touchdown of the night, extending their lead to 18-0. It was a hard night for Bell County on 2-point conversions as their first three were unsuccessful. However, the Bobcats still managed an 18-point advantage with 5:13 remaining before the half.

With the Rockets moving the ball and chewing the clock, the Bobcats forced them into a punt with just over a minute remaining before half time. After a big run of 40-yards by Stephney, Dean found the end zone for the second time of the night, extending the Bell County lead to 24-0, which they held at the half.

With Rockcastle opening the second half on offense, the Bobcats came down with an interception by Hayden Callebs, halting the most successful Rockets’ drive of the night.

Three plays later, Stephney connected with Dean for a 43-yard touchdown, giving the Bobcats a 30-0 lead. Bell County then connected on their first 2-point conversion of the night, extending the lead to 32-0 with 7:08 remaining in the third quarter.

Stephney added one final touchdown to ground the Rockets on a 35-yard dash to the end zone. After a successful PAT from Jones, a running clock was implemented with Bell County leading 39-0. The clock drained fast in the remainder of the game, allowing the Bobcats to post back-to-back shut out victories in the playoffs.