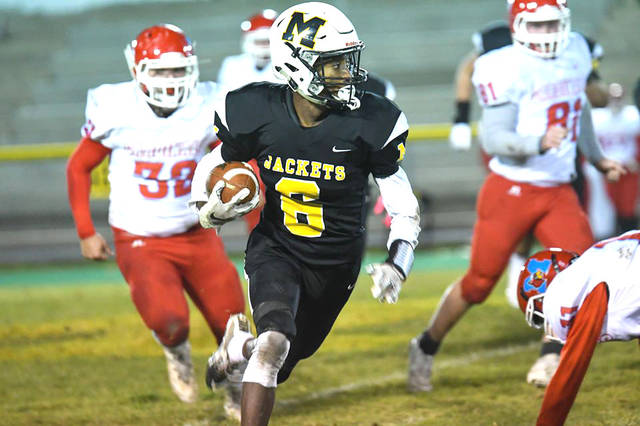 Jabari Kyle finds running room during Middlesboro’s regular-season finale against Martin County. He currently sits second in the state in rushing and scoring in Class 2A.

Seeing Jabari Kyle don a Middlesboro uniform is nothing new to Jacket fans. Since he was in the eighth grade, the standout athlete has helped the high school be successful.

Usually on the hardwood, Kyle took over a new role this year as a member of the football team — the first time he has put on shoulder pads since his days of playing quarterback for the middle school team. The result has been extravagant.

In his first year on the high school gridiron, Kyle has quickly become one of the premiere athletes in Kentucky. He sits second in the state in rushing in Class 2A with 1,499 yards and 26 touchdowns while averaging 136 yards per game. The only player in front of him is Shelby Valley’s Dalton Meade (1,830 yards, 27 touchdowns), a player Middlesboro could see if they upset Breathitt County on Friday.

According to KHSAA, Kyle is also second in Class 2A in scoring — averaging 17.8 points per game. Again, he is only behind Meade — who has played one less game than the Jacket standout this season.

While football will always be a team sport, Kyle’s effect this season cannot be ignored. Of the 360 total points scored by Middlesboro this year, the senior wide out is responsible for 196 of them.

“Jabari has been making some plays for us. He has helped us offensively,” said Middlesboro’s Larry French earlier in the season after the Jackets escaped Lynn Camp with a 28-27 victory.

Kyle’s consistent play got the attention of other coaches throughout the season as well.

“They try to get the ball in his hands. They play him at quarterback. They play him at receiver. They play him in the slot. He’s definitely a weapon. He’s the fastest kid we’ll see,” said Harlan coach Eric Perry in the lead up to Middlesboro’s game against the Green Dragons. “That’s the key, trying to contain (Kyle).”

Kyle and the Yellow Jackets started the first game of the postseason off right, defeating Leslie County 57-22. In his first taste of playoff pressure, he exploded to 395 yards and six touchdowns on 16 carries.

It’s conceivable to expect Middlesboro’s chances for success against District 7 ace Breathitt County depend heavily on Kyle. In their match-up earlier this year, the Bobcats were effective at shutting down the Jacket offense allowing only 147 yards of total offense. Kyle was held to only 7 yards on four carries that night.

No one knows what the outcome of Friday’s game will be but, whether it’s his final game of the year or just a mere stepping stone to round three, Kyle has been the x-factor for Middlesboro’s successful season.