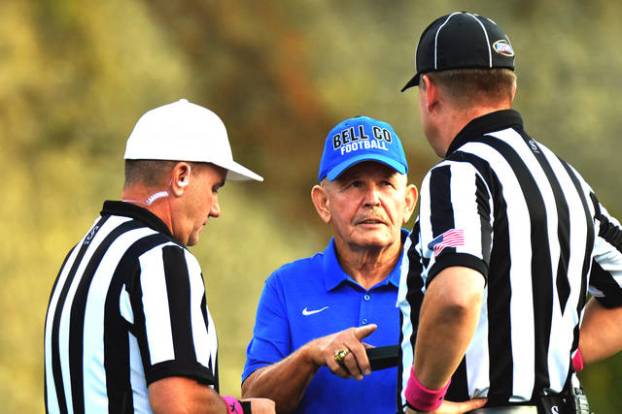 Bell coach Dudley Hilton talks to the refs before a game earlier this season.

Bell vs Rockcastle County: Round 2

The Bell County Bobcats haven’t faced an opponent all season that was able to best them. Heading into the second round of the KHSAA 3A playoffs, the Bobcats bolster an 11-0 record and the No. 1 ranking in the state in Class 3A.

Bell County is coming off of their second shutout against Garrard County of the season, defeating them 39-0 in the regular season and 44-0 in the first round of the playoffs.

The Bobcats are set to take on the Rockcastle County Rockets this week, a team that they already defeated earlier this season 39-6 on Log Mountain.

The Bobcats limited the Rockets to less than 200 total yards while racking up over 400 yards of their own. Quarterback London Stephney completed 66% of his passes in the game, going 10-for-15 for 158 yards and two touchdowns. He also had 10 carries for 91 yards and a touchdown. Brandon Baker gashed the Rockets for 115 yards and a score on 14 carries in their last meeting as well.

Bell County racked up over 300 yards of offense and held the Golden Lions to under 150 and zero points. The Bobcats have accumulated over 3,000 rushing yards this season and over 1,200 passing yards. They have outscored their opponents 491-121 on the season.

If the Bobcats are able to win, they will advance to the third round of the KHSAA class 3A playoffs for the second straight year.

The Middlesboro Yellow Jackets are having their best football season in quite a while, and they will look to continue... read more