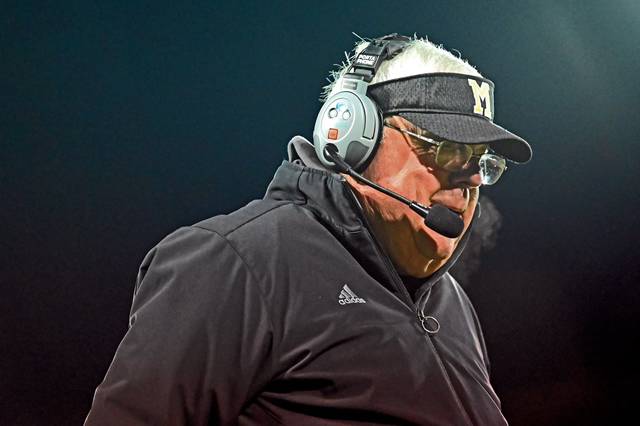 Larry French observes the field prior to making offensive adjustments.

The Middlesboro Yellow Jackets cruised to a 57-22 victory over the Leslie County Eagles on Friday thanks to a six touchdown performance by Jabari Kyle. This was the first time Middlesboro had hosted a playoff game since 2013, when they hosted and defeated Leslie County 44-28.

After starting the game sluggish on their first possession, the Yellow Jackets got things going on their second when Caleb Bogonko ripped off a 21-yard run to set the Jackets up in the red zone with a chance to score. On the next two snaps, quarterback Eric Helton eluded pressure and drove his team inside the 5-yard line.

The Leslie County defense held Middlesboro for three straight downs before Kyle was able to punch it in from a half yard out. Thaisan Sin added his first of many PAT’s on the night to give the Jackets and early 7-0 lead.

After holding the Eagles to a three-and-out and forcing a punt, Middlesboro was set up with good field position after a Leslie County penalty. On the ensuing play, Kyle darted down field for 39 yards, giving the Yellow Jackets a 1st-and-goal at the Leslie 7-yard line. From there, Kyle danced into the end zone for his second touchdown of the first quarter increasing the Middlesboro lead to 14-0.

With Leslie managing to finally put something together on offense, the Eagles were grounded by a big interception from Craig Brock. After regaining possession, Kyle blazed down the field eluding tacklers and found his way into the end zone from 31 yards out for his third touchdown of the half. Sin put the extra point right down the pipe, which gave Middlesboro a 21-0 advantage with 10:00 remaining before the half.

After stopping the Eagles yet again, Middlesboro regained possession of the ball. On the ensuing play, Kyle flew up the field for a 45-yard touchdown run, his fourth of the first half. The Jackets led 28-0 after Sin booted through his fourth extra point of the night.

The Eagles received the third quarter kickoff and took it all the way down the field for their first touchdown of the night. After finally getting on the board, Leslie County had drawn the score to 28-8 with just 14 seconds shaved off of the second half clock.

Kyle continued to find success on the ground in the second half. On Middlesboro’s first possession of the third quarter, Kyle took the ball 75-yards for a touchdown, giving the Yellow Jackets a 35-8 lead after another Sin PAT. Leslie County added another touchdown in the quarter, but Middlesboro answered each time.

After increasing their score throughout the second half, the Jackets sealed the game on a 94-yard touchdown run by Kyle — his sixth and final of the game.

Leslie County added one final touchdown to their 2019 season before the final horn sounded with Middlesboro claiming a 35-point victory in the first round of the KHSAA 2A playoffs. With the victory, Middlesboro improved to 8-3 on the season.

Kyle credited the offensive line and his team’s preparation with the winning outcome. “We prepared very hard all week,” said the senior receiver. “We knew it was going to be a cold night, so we had to focus and make as few mistakes as we could. Our offensive line was fantastic tonight, that’s why we had so much success running the ball. I am very proud of our team right now and how all of us played. This is our first playoff win in quite some time, and we worked very hard for it.”

Kyle said coach Larry French has proven that he is a great coach. “He’s one of the best coaches in Kentucky history, and I think it’s already showing. He always has us ready to go, every single week. We are all bought into what he wants us to do, and we just keep working hard to get better every week. We have a tough game coming up this week, but we know he will have us ready.”

Coach French said that his team deserved this win. “They’ve worked hard. They deserve this win. We had some good runs on offense. Jabari, Caleb and Riley (Gent) ran well. They all blocked well. Jay Tyler blocked very well also. Our offensive line played a great game. Defensively, we got the job done in the first half, forced some turnovers and allowed our offense to be in a good position to score.”

“We kind of got a little excited there at the end of the half,” said French. “We could have handled that a little better. We came back out the second half and they took the kick off back for a touchdown, which gave them some momentum. Luckily, we were able to answer and get a running clock.

“I think Leslie County is a good football team. They do some things well and they just got us on a night where we were playing very well. It was a good win for us, and we’ve got a tough game next week and we have to find a way to clean up the things we didn’t do so well in this game.”

With the victory, the Yellow Jackets advanced to the second round of the KHSAA class 2A playoffs and will take on the 11-0 Breathitt County Bobcats. Middlesboro fell 57-7 in the previous match up with the Bobcats this season.