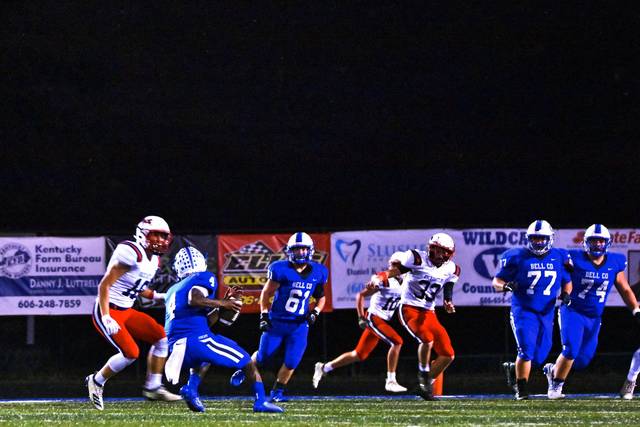 London Stephney eludes tackles on his way to the end zone.

The Bell County Bobcats rolled to their 11th win of the season on Friday night in a 44-0 rout of visiting Garrard County in the first round of the KHSAA 3A playoffs. This is the second time this season that the Bobcats shutout the Golden Lions. They previously defeated Garrard County in October, 39-0.

The Bell County offense accumulated 313 yards of offense while limiting Garrard County to 156 yards. London Stephney played a very efficient game to start the playoffs. He completed 7-of-8 passing attempts for 165 yards and four touchdowns. He also had three rushes for 21 yards and a touchdown.

Although Bell County opened things up through the air during this game, they were also successful in the running game, racking up 148 yards on the ground. Dawson Woolum led the Bobcats’ rushing attack with seven carries for 39 yards. Jonathon Beverly rushed twice for 38 yards and a touchdown. Brandon Baker had five carries for 36 yards. Ethan Raby had two carries for 11 yards. William Dean and Tyson Thomas had one carry each, for one yard apiece.

The Bell County defense limited Garrard County’s offense throughout the game. They forced an interception and three tackles for loss. Hunter Bailey led the Bobcat defense with 11 tackles, one for loss. Ethan Raby followed closely with 10 tackles with one for a loss. Caleb LeFevers had eight tackles with one being for loss. Jonathan Lankford came down with an interception, which he returned for 14 yards.

The Bobcats will take on the Rockcastle County Rockets Friday night on Log Mountain. When these two met in October, Bell County emerged with a 39-6 victory after limiting the Rockets to 191 total yards while gaining just under 400 yards of their own.