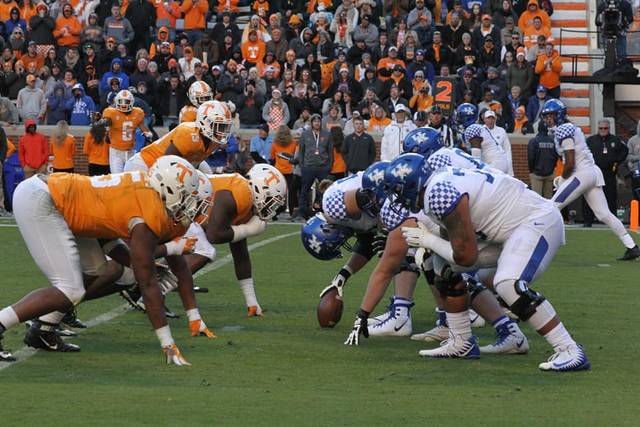 The Tennessee-Kentucky rivalry is one of college football’s oldest rivalries. Both charter members of the SEC, the two teams have been meeting head-to-head annually since 1883.

Tennessee versus Kentucky — one of the oldest rivalries in college football. This game has had its fair share of intriguing moments to say the least. Formerly known as the “Battle for the Barrel,” this game has featured a multitude of some of the best players to have ever played in the Southeastern Conference.

From 1925-1997, the winner of the annual rivalry was awarded a bourbon barrel that was created in the prohibition era to symbolize one team’s dominance over the other. The year of its inception, the barrel was painted with the words “ice water” on it, to avoid any scandalous backlash of prohibition advocates.

The trophy was discontinued after being mutually agreed to by both schools, following a fatal 1998 vehicle accident that involved two Kentucky football players. The barrel is believed to be in the possession of the University of Tennessee, but has not been confirmed.

Tennessee has dominated the rivalry with Kentucky. Bolstering an all-time record of 80-25-9, Tennessee has seen to it that the all-time series is pretty one-sided. From 1985 to 2010, the Wildcats could never get over the big orange hump. However in 2011, the Volunteers came to Lexington and left with an “L.”

Since the victory in 2011, the Cats have won one time against the Volunteers — a three-point decision in 2017 in Lexington that saw Kentucky escape with a 29-26 victory. The following season, in 2018, the Cats were having their best season since Bear Bryant’s 1950 Wildcats squad that finished with an 11-1 record and still fell to the Vols 24-7 in Knoxville. The one loss in 1950 was also to Tennessee.

With a season-ending injury to “Touchdown” Terry Wilson and Troy transfer quarterback Sawyer Smith being a little banged up, Kentucky has been relying on the athleticism and decision-making of senior do-it-all wide receiver Lynn Bowden Jr. for much of the 2019 season.

So far, the Wildcats have fallen short of lofty expectations that followed into this season from the last. Although they lost a ton of productivity from last season, they still felt as though they had playmakers that would help put them in a position to win plenty of games.

Kentucky is two weeks removed from defeating a top-25 ranked Missouri Tigers squad and are coming off of a week of rest. However, the Cats will still be relying on the legs, and arm, of Bowden.

Tennessee looks like a completely different team than the one that lost 38-30 to a Sun Belt team in their season-opener. Since, they have won games against Mississippi State and South Carolina, which are the only common opponents between the two and also two teams that made it past Kentucky unscathed. The Volunteers are two weeks removed from a 41-21 drubbing of Mississippi State and homecoming victory over UAB last week, 30-7.

In order for Kentucky to win this game, they are going to have to control the time of possession and limit their turnovers. With the lack of a passing game, the Cats should have no problem chewing up plenty of clock on offense, as long as they keep moving the chains. Kentucky will have to capitalize on every possession and limit the Volunteers to as little as they can.

The Cats will also have to block out excess noise surrounding their head coach and his potential departure to Florida State. Tennessee is having issues with their quarterback situation as embattled quarterback Jarrett Guarantano has drawn staunch criticism from both fans and analysts alike. With inconsistencies at the helm, Kentucky may look to exploit the Volunteers’ offensive inadequacies.

The Tennessee defense has been playing very well lately. They have been forcing a lot of turnovers, which is a staple of a Jeremy Pruitt coached team. Kentucky will have to take care of the ball. They will have to protect the ball when carrying it and limit costly procedural penalties as well.

All-in-all, this game may appear to be a close match-up on paper. However, the Cats’ offense has become one-dimensional without the arm of a true quarterback. Bowden has proven that he can create opportunities for Kentucky to score, but with the way Tennessee has been playing lately, I fully expect the Volunteers to roll out of Lexington with a win.

MHS cheerleaders to compete for national title in February