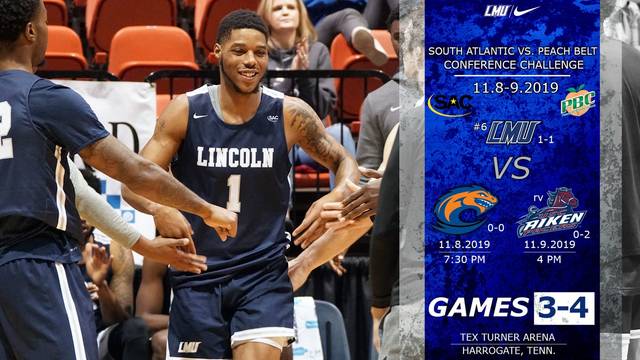 The two-day, four-team conference crossover tournament hosted by the Railsplitters takes place Friday and Saturday, Nov. 8-9 inside B. Frank “Tex” Turner Arena. In addition to LMU (1-1), fellow SAC member Tusculum and the Peach Belt’s Clayton State and USC Aiken will each be playing a pair of games in Harrogate.

The Railsplitters began their 2019-20 journey last weekend as one of eight teams to take part in the fourth annual Small College Basketball Hall of Fame Classic in Saint Joseph, Mo. The nation’s most prestigious in-season tournament for NCAA Division II men’s basketball provided LMU with the opportunity to take on two of the nation’s top teams from outside of the NCAA Southeast Region.

Facing top-10 West Texas A&M for their season opener, the Railsplitters played an overtime thriller against a team that is ranked No. 7 in the country by the National Association of Basketball Coaches (NABC) and No. 5 in the preseason D2SIDA Media Poll.

Sophomore guard Courvoisier McCauley knocked down a go-ahead 3-pointer with 5.6 seconds remaining in regulation on a dish from senior guard Anthony Brown, putting LMU up 86-83. However, the season-opening top-10 matchup was sent into overtime when the Buffs’ Qua Grant drained a wing trey with just under two seconds on the clock. West Texas A&M would outscore the Railsplitters 13-3 in the extra five-minute period to hand LMU head coach Josh Schertz’ just his second season-opening loss in 12 seasons at the helm.

How did the Railsplitters respond after the opener against the Buffs? They put together one of the most complete games in LMU men’s basketball history, torching the nets and holding the defending Great Lakes Intercollegiate Athletic Conference regular season champions to just 48 points and 34.7 percent (17-of-49) shooting this past Saturday. Inside Saint Joseph Civic Arena, the Railsplitters put on a shooting clinic against Davenport, who is ranked No. 22 in the preseason D2SIDA Media Poll and receiving votes in the NABC Preseason Top 25.

Registering the eighth-highest field-goal percentage in program history with a 64 percent (32-of-50) clip, LMU put up 98 points in a 98-48 triumph. Going 18-for-27 (66.7%) from deep and beginning the game 18-for-24, the Railsplitters recorded the sixth-best three-point shooting performance in terms of percentage in school history. Both the 50-point margin of victory and the 18 made three-pointers were Small College Basketball Hall of Fame Classic records.

Following the Panthers’ 50-point defeat at the hands of LMU, Davenport traveled to Division I Grand Canyon University Tuesday night where they handed the Lopes their first loss in a home opener since 2002. The Panthers knocked off GCU 82-73 inside GCU Arena, a squad that was picked second in the Western Athletic Conference and featured two preseason All-WAC players.

For their performances over the opening weekend both McCauley and Anthony Brown were named to the 2019 Small College Basketball Hall of Fame Classic Team. A native of Indianapolis, Ind., McCauley led all Railsplitters in the two games, averaging 22.5 points and shooting 47.1 percent (16-of-34) from the field.

The 6-foot-5 guard went 9-for-19 (47.4%) from distance and collected nine rebounds, pouring in 24 points on 6-of-9 three-point shooting in LMU’s rout of Davenport. McCauley also had 21 points in 26 minutes of action against seventh-ranked West Texas A&M.

Meanwhile, Anthony Brown led the team in both rebounding (6.5 RPG) and assists (4.5 APG) in the Railsplitters’ trip to Missouri. The Clermont, Florida, native shot 47.4 percent (9-of-19) from the floor to average 13.5 points. Anthony Brown secured his sixth career double-double with 18 points and 10 rebounds against the No. 7 Buffs, before handing out a game-high seven assists and scoring nine points versus the Panthers Saturday afternoon.

Off to Strong Starts

McCauley and Anthony Brown are not the only LMU players who had strong outings in Missouri as redshirt junior guard Devin Whitfield showed why he was a star at fellow Division II Trevecca Nazarene in Nashville. Whitfield averaged 13.5 points across the two games and shot the ball at a 58.8 percent (10-of-17) mark, connecting on 4-for-8 from deep. Redshirt sophomore guard Cameron Henry is the fourth Railsplitter averaging double-figure scoring following the first weekend of play after totaling 24 points at the Small College Basketball Hall of Fame Classic and averaging six rebounds. The 6-foot-6 Chesterfield, Virginia, native went 9-for-15 (60%) from the field and 4-for-8 from beyond the arc over the weekend as a starter.

The Railsplitters will be participating in their second-straight and third overall SAC vs. Peach Belt Conference Challenge, where LMU holds a 2-2 record in such tournaments. A season ago, LMU traversed to SAC vs. Peach Belt Conference Challenge host USC Aiken in South Carolina where the Railsplitters’ began their 2018-19 campaign with an 82-61 win over Clayton State. The following day, LMU was outdone 79-68 by the Pacers in Aiken.

The Railsplitters are ranked No. 6 nationally according to the NABC’s preseason poll and are tied for 13th in the preseason D2SIDA Media Poll, which was released earlier this week. LMU has also gained national attention from a pair of preseason publications with the Blue and Gray tabbed No. 6 by Division II Bulletin and No. 9 by Street & Smith’s. With the announcement of the preseason D2SIDA Regional Polls earlier this week, the Railsplitters are ranked No. 3 in the Southeast Region.

LMU has finished within the top two of the final SAC standings for the last nine years, spent 95-straight weeks in the national rankings from December 2010 to December 2016 and completed the season as the top team in the country in two of the last four years. The Railsplitters are one of four Division II programs to have posted 20 wins or more for 10 consecutive years. Only West Liberty (15), Bellarmine (11) and Indiana Pa. (11) can say the same. LMU has also reached the NCAA Tournament eight of the last nine seasons.

Coach Schertz Among the Elite

Since taking over the LMU men’s basketball program in March of 2008, head coach Josh Schertz has amassed a remarkable 287-65 (.815) record over 12 seasons. Entering the 2019-20 season, Schertz’ career winning percentage (.817) was the fifth-highest of any head coach in college basketball history at any NCAA level. Furthermore, Schertz ranks third among active head coaches with at least 10 years at the helm – Jim Crutchfield, Nova Southeastern (.844) and Mark Few, Gonzaga (.823) – and owns the second-highest winning percentage among Division II leaders.

Much like the Railsplitters, Clayton State faces a daunting 2019-20 schedule with seven of the Lakers’ opponents having reached the NCAA Tournament a season ago.

LMU is 2-0 all-time versus Clayton State having won an 82-61 affair in Aiken, South Carolina, for last season’s opener after handing the Lakers an 87-61 loss inside Tex Turner Arena in the 2018 NCAA Division II Southeast Regional semifinals.

The Pacers also competed in the 2019 Small College Basketball Hall of Fame Classic in Saint Joseph, Missouri, last weekend where they fell 77-68 to receiving votes Davenport and lost 91-80 to No. 7 West Texas A&M.

The Pacers are led by standout senior guard Xzavier Barmore, a preseason All-PBC pick who earned all-region, all-conference and all-tournament team accolades as a junior after scoring 611 points (18.5 PPG) and averaging 5.8 assists.

Receiving votes in the NABC Preseason Top 25, USC Aiken is tied for fifth in the Southeast Region with Catawba according to the preseason D2SIDA Regional Poll.

The Railsplitters’ only other game against USC Aiken in program history was last season’s SAC vs. Peach Belt Conference Challenge matchup, a 79-68 home win for the Pacers.