Pineville vs. Lynn Camp: Round 2 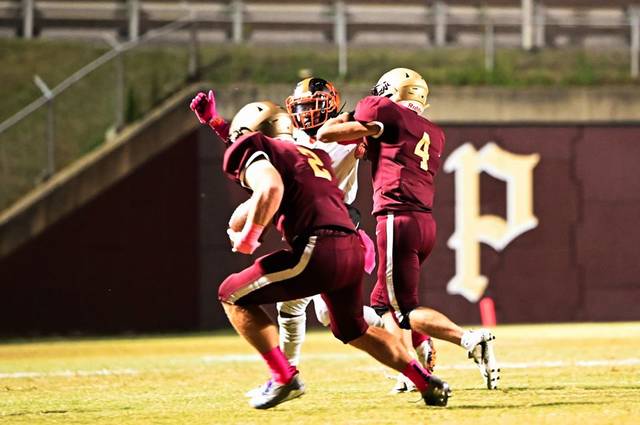 Colby Frazier cuts around the left edge as he heads towards the end zone against Lynn Camp in a previous game.

The Pineville Mountain Lions are looking to build upon a successful season against a familiar opponent in the first round of the KHSAA 1A playoffs as they host the Lynn Camp Wildcats this week. This will be the first playoff game the Lions have hosted since 2016 when they hosted Jenkins in the Lions Den.

Pineville finished the regular season with an 8-2 record after downing Sayre 44-9 last week on the road. The Lions have found a lot of success on the ground this season en route to outscoring their opponents 314-135 on the season, along with stout defense.

The Lions have been led by a two-headed monster in the backfield with running backs Colby Frazier and Devon “Scooby” Morris. Frazier leads the team in rushing yards with 1,545 yards on the year along with 20 rushing touchdowns. He also ranks 13th in the state in rushing yards.

Morris has helped keep opposing defenses on their toes as a nice change-of-pace back. Morris has accumulated 1,149 rushing yards on the season along with 12 rushing touchdowns. He also provides a spark in the receiving and special teams games with a touchdown receiving and two in special teams.

Lynn Camp has tallied a 4-5 mark on the year and has been outscored 232-208. They are led by running back Chase Brown with 786 yards and eight touchdowns. Jayden Dunn is a change-of-pace back who brings a shiftier running style to the Wildcat offense.

Dunn has 368 yards on the season and three rushing touchdowns. He also has two touchdowns receiving. Gilbert Spencer leads the receivers with 14 receptions for 350 yards and five touchdowns.

In the previous match-up between these two, it was a low scoring slugfest. Pineville defeated Lynn Camp 14-6 in October at home. The Lions allowed less than 200 total yards against the Wildcats during that game. Morris and Frazier scored both of the Lions’ touchdowns in that game as well.

If Pineville is able to win this game, they will improve to 9-2 on the season and presumably meet the Williamsburg Yellow Jackets in the second round of the KHSAA Class 1A playoffs.