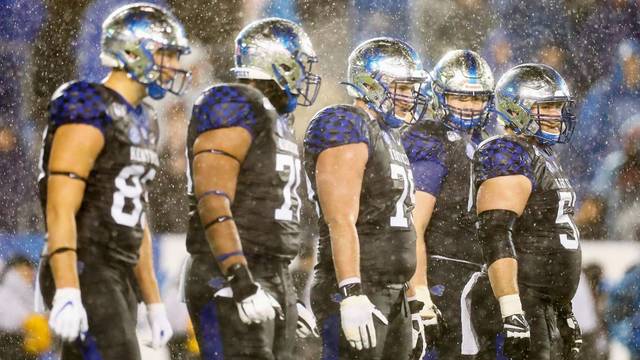 Before the season, Eddie Gran didn’t know what to make of having two bye weeks in the span of a month.

Now, as an offensive coordinator who has started three quarterbacks and rebuilt his offense along the way, Gran’s feelings are clearer.

“You weren’t quite sure about having two bye weeks here, but you couldn’t have asked for a better time,” Gran said. “Just for an opportunity to add some more stuff and building on packages. You’ve got two quarterbacks you can do different things with, so that’s been really good for us.”

Kentucky is three games and two bye weeks into the Lynn Bowden Jr. experience, with the dynamic former wide receiver taking over as UK’s signal caller and potentially saving UK’s season in the process. Astoundingly, Bowden has run for 499 yards in those three games while passing for another 149 and taking quite a beating along the way.

“It relaxed me,” Bowden said of the second bye. “It gave me some rest. It gave the whole team some rest.”

Coming out of that bye, Bowden and the Wildcats (4-4, 2-4 SEC) are preparing to host Tennessee (4-5, 2-3 SEC) at 7:30 p.m. on Saturday. The forecast for the evening calls for cooler temperatures, but a reprieve from the torrential rain of UK’s last two outings. That could mean that Bowden will be unleashed in the passing game.

“You got a glimpse of it,” running back AJ Rose said. “He threw a good pass the previous week, but Lynn can do it all. We look forward to running this offense and the plays we put in this week, throwing wise. We look forward to completing a lot of passes and putting on a show like he always does.”

As Gran hinted, there’s also a possibility Sawyer Smith could play more extensively at quarterback. Out since the South Carolina game save for completing one pass against Missouri when Bowden exited briefly, Smith is approaching full health.

“We’ll see where it goes,” Mark Stoops said. “We’ll see where the preparation goes this week. I think getting Sawyer back another week to prepare, I think he’s getting closer and closer, knocking off all that rust.”

UK will undoubtedly be more dangerous with more production in the passing game, whether it’s Smith, Bowden or both to deliver it, but that won’t change the identity of this group. And it can’t, not if the Cats are going to finish the season the way they intend to.

“I hope that when people put on our film they see this is a physical offense,” Gran said. “We’re physical up front, we’re physical on the perimeter and that’s what I want to see. That’s what I’d like for people to say about our offense. They play hard and they give you everything they got.”

Though Bowden has been the face of UK’s resurgence, no one is more instrumental to it than the Wildcat offensive line. The group that was expected to be the strength of the offense is now playing at the level they expect of themselves.

“I’m pleased with where they’re at and how they’ve played,” Stoops said. “… Like all of the team, with myself and everybody in the organization, there’s always times when you can do better. We’re always going to embrace that, look at ourselves, start with yourself and your play, my job coaching them, and everybody in the organization do as good as they can. If there are areas where they’re falling short, I can promise you those guys are very conscientious, they’re very well coached, and it’s important to them.”

That’s not to say it’s been easy. Bowden’s move to quarterback has necessitated adjustments because defenders aren’t the only ones who can’t predict where he’ll go next.

“You don’t know what’s going to happen,” Landon Young said. “You sit there and you hold on for dear life. He’s going to make something happen whether it’s throwing the ball, whether it’s getting out of there. You’ve definitely gotta be a little more active.”

“You know they’ve got really athletic guys up front,” Young said. “They have a couple older guys, a couple younger guys, but just guys that throughout the season have really picked up their game, picked up their attitude and swarming the ball and really trying to be active inside.”

The Vols, like the Cats, have come on strong over the last month. After a 1-4 start, Tennessee has won three of its last four games. The only loss in that stretch came to Alabama and two of the wins (Mississippi State and South Carolina) against teams that have beaten UK.

“You can see as the season goes on they have become a lot different defense than they were game one to what they are right now,” Gran said. “It’s going to be a tough task and they’re really good. They’re stout and they can run and they’re well coached. They do a nice job.”

The Vols certainly did that last year against UK, scoring a 24-7 upset as the Cats handed in their worst performance of an otherwise historic 2018 season. Stoops and his team aren’t going to dwell on the past, but they won’t ignore it either.

“We went in there last year and they handed it to us,” Rose said. “We look forward to going out this year and competing all four quarters and coming out with a victory. Last year left a bad taste in our mouths. We don’t want that same taste.”