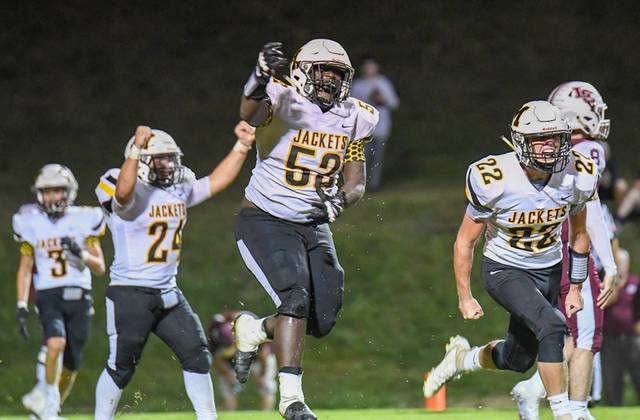 The Yellow Jackets celebrate after defeating Leslie County 28-27 earlier this season on the road.

The game this year features two totally different teams than those in 2013. In 2013, the Eagles only had three wins prior to falling to Middlesboro in the playoffs. This season, Leslie County holds a 5-4 record with wins over Perry Central, Owen County, Knott Central, Morgan County and Harlan.

In 2013, the Yellow Jackets held a 8-2 record prior to defeating the Eagles in the playoffs. For the first time since, Middlesboro is seemingly in the exact same position with the only difference being one more loss. The Yellow Jackets worked their way to a 7-3 regular season this year with wins over Garrard County, Lynn Camp, Harlan, Pineville, Leslie County, Morgan County and Knott Central.

In their previous match up this season, the Yellow Jackets took down the Eagles in a one-point decision on the road, 28-27. The narrow victory was Middlesboro’s third such game of the season.

The Eagles are led offensively by Trent Asher. Asher is listed as a wide receiver but lines up in the backfield often as well. On the season, Asher has accumulated 20 total touchdowns — eight through the air and 12 on the ground. He has racked up just over 1,300 total yards on the year. Quarterback Zack Parker has just under 1,200 yards passing on the season with 14 touchdowns and 11 interceptions. Brannon Stubblefield is the Eagles’ featured running back and has racked up just under 700 rushing yards on the season with 11 touchdowns.

The Yellow Jackets are led offensively by senior playmaker Jabari Kyle, who has 26 total touchdowns on the season, 1,104 rushing yards and 433 reception yards. Kyle currently ranks ninth in the KHSAA stat leaders for scoring with 26 touchdowns on the year. Quarterback Eric Helton leads the team in passing with 737 passing yards with nine touchdowns to six interceptions. Riley Gent and Caleb Bogonko help anchor the running back position, and Ethan Barton helps lead the receivers.

The Leslie County defense has struggled this season, allowing 244 points from their respective opponents. Middlesboro has allowed 253 points, but that number is skewed thanks to big performances from Williamsburg and Breathitt County.

With a victory, Middlesboro would improve to 8-3 on the season and advance to the second round of the KHSAA class 2A playoffs against an opponent that has yet to be determined. If the Yellow Jackets lose, that will mark the end of their season.