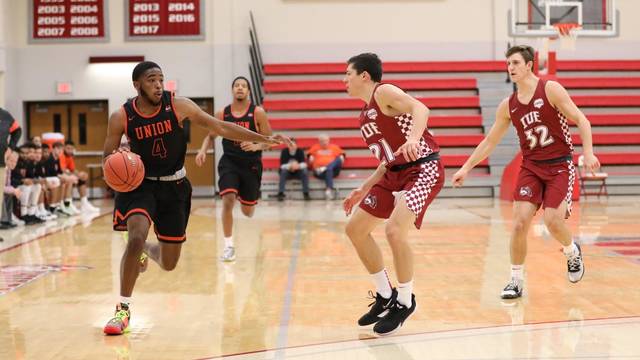 Union hosts its home opener on Saturday, taking on Allen University (S.C.) in AAC play. Tipoff is set for 4 p.m.

DAYTON, Tenn. — An early run proved to be the difference as No. 17 Union College played catch-up most of the evening as host Bryan College (Tenn.) scored the 76-66 Appalachian Athletic Conference (AAC) victory.

The Bulldogs pulled even twice midway through the second half with the final time coming after Richard Brown’s bucket made it 49-all with 8:51 to play. Yet, Bryan answered with a 14-1 run to open up a 63-50 cushion with 3:37 remaining. Union got the deficit within six twice down the stretch, but Bryan closed out the game accounting for six of the final eight points for the 76-66 decision.

Three Bulldogs scored in double figures with Carson’s 22 points leading the way. The senior guard hit 8-of-13 shots and went 5-for-6 at the foul line in netting the game-high. Jakobe Wharton added 14 points, and Brown chipped in 10.

Carson leads the Bulldogs in scoring on the season with 20.0 points per game.

Bryan has won two of the last three meetings with Union. Both of the wins came in Dayton.

Union hosts its home opener on Saturday, taking on Allen University (S.C.) in AAC play. Tipoff is set for 4 p.m.

Pineville vs. Lynn Camp: Round 2