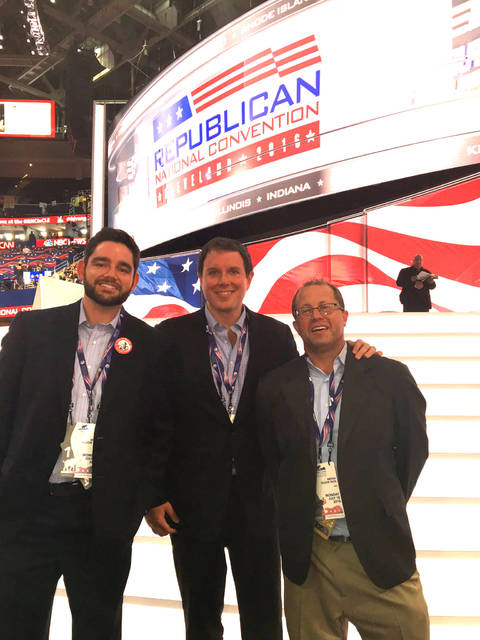 Matt Jones, center, stands with KSR co-hosts Drew Franklin, left, and Ryan Lemond during the 2016 National Republican Convention. On Wednesday, Jones was asked to stay off Kentucky Sports Radio for a while by iHeart Media after the Republican Party of Kentucky filed a complaint with the FEC.

Middlesboro native and Kentucky Sports Radio host Matt Jones has been essentially put on leave after the Republican Party of Kentucky filed a complaint with the Federal Election Commission. The party alleges Jones received illegal campaign contributions from his employers and failed to properly disclose them.

“Due to the Mitch McConnell complaint filed this morning with the FEC against me, iHeart Radio has asked that I not be on the show in the upcoming days,” said Jones in a statement on KSR’s website. “The complaint is absolute nonsense and very disappointing from someone as powerful as McConnell.”

Jones, an outspoken Democrat, has been contemplating running against U.S. Senator Mitch McConnell for the senate seat in 2020. Earlier this year, the radio host filed paperwork with the FEC to form an exploratory committee. Up until now, Jones has not made a decision on whether or not he would run for the office.

“I have said repeatedly in public and in filings with the FEC that I am not yet a candidate, and I haven’t used the show to raise money or talk about my Exploratory Committee in any way,” said Jones in the statement. “Nevertheless, Senator McConnell has complained that having me on air is unfair, and the man who speaks often about the importance of free speech and the exchange of public ideas has decided to cut off mine.”

Jones said “for the time being” he will not be on Kentucky Sports Radio. He went on to say in the statement that he understands iHeart’s decision.

“Since I will be making a decision on whether to run very soon, fighting this battle with the Senate Majority leader doesn’t make sense,” said Jones referencing iHeart’s decision. “I get it and still value my relationship with them. If I choose in the coming days not to run, I hope to extend my deal with iHeart Radio and continue KSR into the future.

“I had hoped to do the show for a couple more weeks, make my decision and then take time off to finish my book and regroup after a long process. Thanks to Senator McConnell, that time will apparently start now. One would think that a man who has at his disposal all the media outlets in America, an unending supply of corporate donations and all the platforms a person could ever need would not be frightened of a sports radio show in Kentucky. Alas, I guess that is not correct.”

Earlier this year, LEX 18 forced Jones to step down from his TV show “Hey Kentucky!” shortly after he announced his book deal with Simon and Schuster. The book he will be writing is titled “Mitch, Please!”