Warn notice sent to Judge Executive from Nally and Hamilton 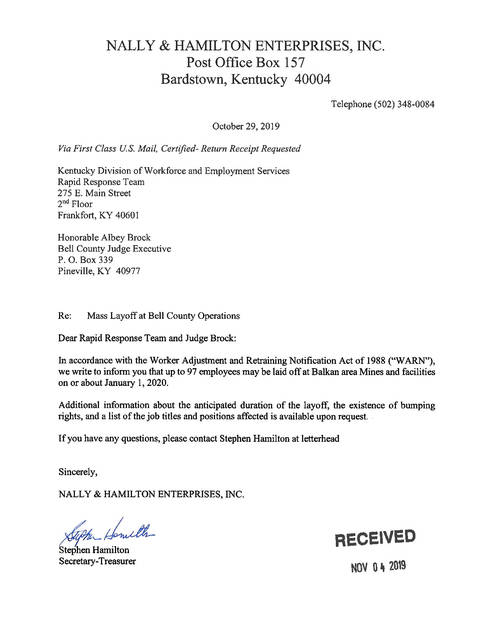 More than 150 people could be laid off at the beginning of 2020 according to a letter sent to Bell County Judge-Executive Albey Brock. Nelly and Hamilton Enterprises filed a WARN notice for five worksites in Eastern Kentucky on Monday. The letter states that up to 97 employees from Bell County may be laid off at Balkan area mines and facilities on or about January 1, 2020.

The affected locations include London, Hyden, Harlan and Pineville.

Nally and Hamilton have been the anchor coal company for not just Bell County but the region for decades,” Judge Brock explained. “So seeing a WARN notice from them is very concerning.”

The document states that additional information will be made available about the anticipated duration of the layoff, the existence of bumping rights and a list of the job titles and positions affected.

“I have complete faith and confidence in the Hamilton family,” Brock said. “I know that if any company can survive, it will be them so I’m hopeful this doesn’t come to fruition.”

In total 170 employees may be affected.

The office of Nally and Hamilton Enterprises, Inc. was contacted by the Middlesboro Daily News, but the office would not comment on the letter.