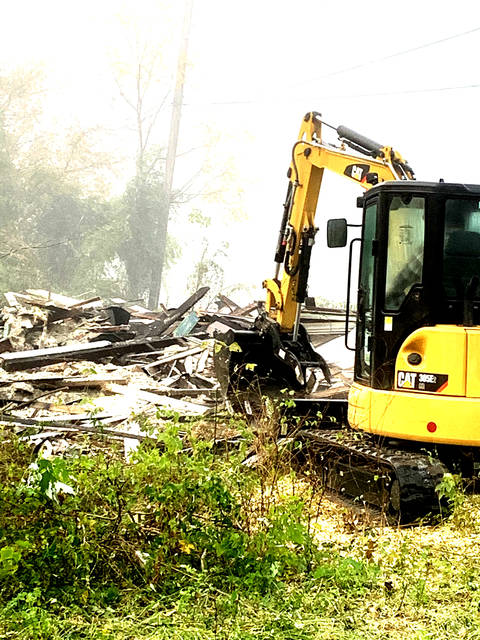 Approximately five homes have been demolished in Middlesboro following the order from the Codes Enforcement Board to the Middlesboro Street Department. The first demolition took place two weeks ago to a home located at Doncaster Avenue and 23rd Street, next to Green Construction.

The demolition order was given after the property owners fail to follow the proper procedure from the Codes Enforcement Board.

“They get so many days and when they don’t respond to the Codes Enforcement Board, they get ahold of us,” Superintendent of the Middlesboro Street Department Kevin Barnett explained. “They tell us what house it is going to be and then that’s where we go.”

Barnett explains that it is his job to keep up with the man hours and any of the equipment that is used during the demolition to turn into the city for labor.

“All of that gets added to the bill and then the property owner gets charged,” Barnett said. “If they don’t ever pay…then the property gets foreclosed on or a lien is placed against the property. That is how the city tries to recoup the money.”

Barnett said that there are certain protocols that must be followed before the demolition on the property can begin.

“We have to make sure that Kentucky Utilities is disconnected,” he explained. “Most likely, if they are not taking care of the house or the property, the utilities have been cut off long before we’ve gotten there because they are most likely not paying their utility bills.”

He said not only do they check with Kentucky Utilities, they also check with the water company to make sure the water has been shut off as well.

Most importantly, he wants the demolition crews to make sure that the homes are vacant.

He said that is the main thing they are worried about when it comes to tearing down a home.

“It always scares me that someone would be inside the home,” he said.

Barnett said that the street department takes care of the demolition and clean up from start to finish.

“We use an excavator and a bulldozer for the demolition and we take care of all of it until it is all done, and then it’s a clean lot again,” he said.

He explained that with the five that they have currently demolished, there are still up to 15 on a list to clean up.

“There are more but they have to get through the timeline to get to those,” he explained. “These are all ready to go and there’s another list that’s still waiting on the final order.”

According to Barnett, the crews can have a house torn down in one day.

“You’re looking at about two to three days per house,” Barnett said. “Just think about it, (it) takes a year to build a house and then less than a day to tear it down.”