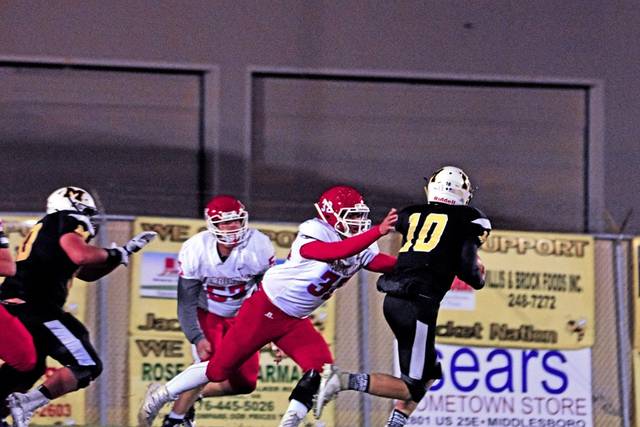 A sluggish start from Middlesboro allowed Martin County to jump out to a quick 14-0 lead, which the Cardinals would never relinquish as they downed the Yellow Jackets 22-19.

Middlesboro’s offense struggled in their first two possessions, fumbling the ball on their first drive and throwing an interception on their second drive. Martin County was able to capitalize on each turnover and quickly jumped out to a 14-0 lead over the home team Jackets.

Middlesboro began to fight back with a 61-yard rushing touchdown by Caleb Bogonko with 8:53 remaining in the second quarter. However, the Cardinals were able to punch in another touchdown before the end of the first half, as well as a 2-point conversion which allowed Martin County to hold a 22-7 advantage with 3:49 remaining in the second quarter.

The Yellow Jackets answered the Cardinal touchdown with a 59-yard touchdown pass from Eric Helton to Jabari Kyle, which closed the gap to 22-13 after a missed extra point. Martin County held the 22-13 lead at the half.

Each team’s offense became slightly stagnant in the second half with only one more touchdown being scored between the two teams. Jabari Kyle was able to punch in another touchdown, this time running the ball, but it wasn’t enough for the Yellow Jackets to overcome the Cardinals.

Martin County drained the final minutes of the clock and we able to hold on and post a three-point victory over the Yellow Jackets.

Helton played an efficient game, completing 80% of his passes. His only incompletion was an interception. He threw for 92 yards and a touchdown. Kyle and Bogonko each had 82 yards rushing and one touchdown each. Kyle also had 69 yards receiving and a touchdown.

Middlesboro plays host to the Leslie County Eagles on Friday night in the opening round of the KHSAA class 2A playoffs. When these two met earlier in the season, the Yellow Jackets emerged victorious on the road in a 28-27 decision.