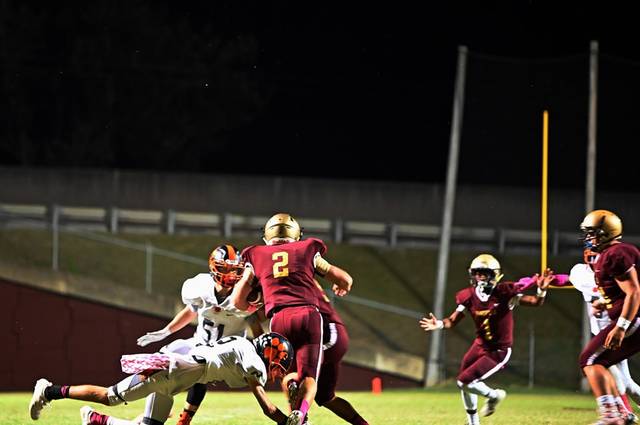 Colby Frazier barrels toward the end zone in the Mountain Lions game against Lynn Camp earlier this season. Pineville will host Lynn Camp in the first round of the playoffs on Friday.

The Pineville Mountain Lions wrapped up their regular season against the Sayre Spartans at home on Friday night. After a sluggish start offensively, the Mountain Lions were able to get things going in the second half and post a 44-9 victory.

Pineville held a 6-3 lead at the half, but they opened up in the second half behind the legs of Colby Frazier and Devon “Scooby” Morris. Morris ended the night with 142 yards on 16 carries with two touchdowns. Frazier ended the evening with 18 carries for 305 yards with two touchdowns and a 2-point conversion.

Reece Capps had four carries for 43 yards and a touchdown. Braiden “Boog” Lingar found his way to the end zone on his only carry, which resulted in a 22-yard touchdown. Luke Naylor successfully converted every point after touchdown that he attempted, going a perfect 4/4 on the evening.

Frazier also led the defense with nine tackles. Lingar followed closely with six tackles. Landon King and Richard Beverly had four each. Timothy Gambrel and Ben Parks had four tackles apiece, and Parks also had a forced fumble as well.

“It was a long trip for us,” said Pineville coach Randy Frazier. “We threw out some different stuff during this game to change things up a little bit. Overall, I’m proud of the way we played, especially in the running game. We were a little stagnant on offense in the first half, but we were able to get it going in the second half.

“We had four guys that were able to score for us, and that just goes to show that we are doing a good job of distributing the ball and working well as a team on offense.”

Ahead of their opening round match-up in the KHSAA class 1A playoffs against Lynn Camp, Frazier expects the Wildcats to be a tough opponent.

“Lynn Camp is a tough team,” said Frazier. “We were lucky enough to take care of business against them earlier this season at home in a defensive slug-fest. They’re going to remember that too when they come back on Friday. They’re a good team that is coached well, and I expect them to give us everything they’ve got. We have a few small things we need to clean up, but we are going to work hard and stay focused.”

With the victory over Sayre, the Mountain Lions closed the regular season with an 8-2 record, including a win over their first-round playoff opponent, Lynn Camp. The Mountain Lions are set to kick off against the Wildcats at 7:30 p.m. on Friday in the Lion’s Den.