Caldwell commits to the University of the Cumberlands 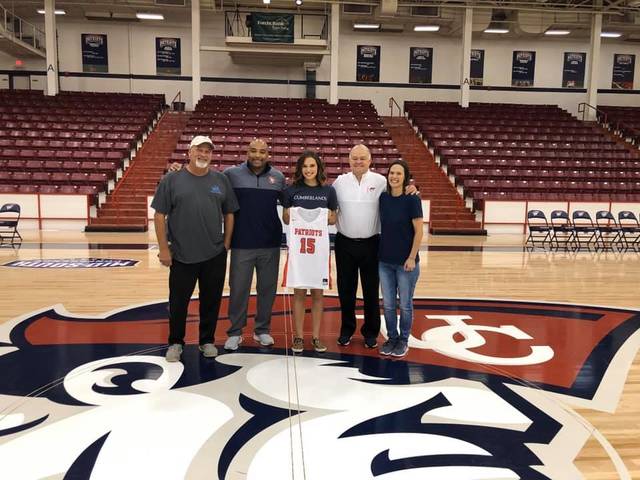 Pineville’s junior guard Whitney Caldwell has decided to further her basketball career at the University of the Cumberlands when she graduates high school.

In a statement on Facebook, Caldwell said, “I am super excited to announce that I will be furthering my athletic and academic career at the University of the Cumberlands. Thank you to every coach and organization that has worked with me and helped me achieve my goals. This process has been a crazy ride, but definitely been worth it. Thank you to my parents for being the biggest supporters ever and the city of Pineville for always backing me in everything I do. All glory to God. Go Pats.”

Caldwell was previously committed to LMU, before decommiting earlier this year after head coach Krystal Evans stepped down from the helm of the Lady Railsplitters.

Recently head coach Rick Reeves coached his 500th victory with the Lady Patriots. “Coach Reeves has an amazing coaching style that I fell in love with. Everyone was really welcoming and treated me like family. I’ve known most of the staff for a long time, and they’ve seen me grow and develop over the years.”

Caldwell is looking forward to the opportunity to grow and flourish in a comfortable environment. “Being able to work on myself in a supportive environment is what UC is all about. I’m super excited to play with incoming players like Kaylee Mathis and Lillie Hall.”

Caldwell adds that she wants to teach after graduating and eventually go on to coach. “I want to major in education and work to become a teacher and hopefully become a coach in the future.”

With Evans stepping down from her position at LMU, Caldwell’s mother Shannon says that her daughter felt it best to decommit from the Lady Railsplitters.

“Once head coach Krystal Evans gave her resignation, Whitney thought it was in her best interest to decommit from LMU,” said Shannon.

Shannon and her husband Ronnie, Whitney’s parents, say they are proud of their daughter and elated that she has chosen the University of the Cumberlands.

“Ronnie and I are very proud of Whitney and her accomplishments. Not only on the court but off the court as well. She has been blessed with a talent given to her by God,” said Shannon. “She has been given a wonderful high school coach Jamie Mills, amazing assistant coaches, school, trainers, AAU experiences and family to help guide her along the way.

“Even though Whitney had other offers she felt as though UC was the right fit for her and where she wanted to be. We are just truly humbled and thankful to the University of the Cumberlands and coaching staff for giving Whitney this opportunity to further her education and basketball career.”

Caldwell still has two years left of high school basketball before heading to the University of the Cumberlands as a member of the 2021 Pineville graduating class.

The Lady Lions open their season on the road against the Corbin Redhounds on Dec. 2. Last season, Pineville finished the season with a 16-14 record. Caldwell led the team in points-per-game with 16.5, edging out Pineville forward Raigan King who averaged 16 points-per-game. Caldwell also led the team in free-throw percentage netting just over 70% of her free throws. She was second in rebounding with 5.9 a game.