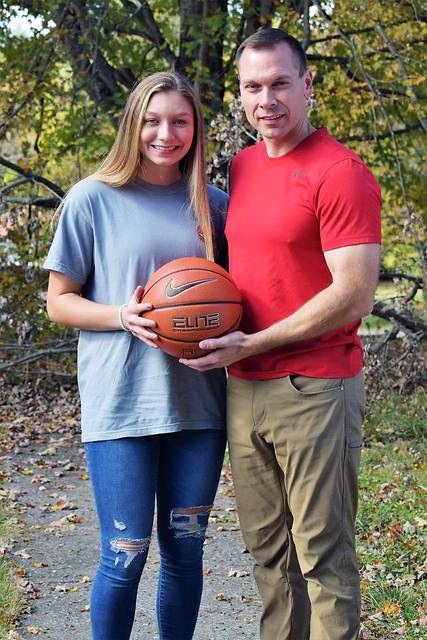 Ally Collett with her dad and assistant coach, Landry Collett.

Ally Collett is a very personable athlete who wants to help her team flourish and give opponents a hard time on the hardwood floor.

And the prep senior is actually a basketball superstar. Collett is ranked as the No. 1 girls’ player from the Class of 2020 in the state of Kentucky, according to a preseason Top 25 poll by Exposure2.0 and Pure Prospects.

In a recent interview, the 5-7 Collett said she wants to guide her team, South Laurel High School, to be much better this winter after the Lady Cardinals did well last season, finishing with a 26-8 mark in 2018-19.

“My team goals are to be the best defending team in the (13th) region, win district (tournament), win region and win state which I know is a big statement but I think we have the team that can do it,” said Collett, a two-time All-State guard. “My individual goals as a senior member of my team is to do everything I can do to help my team succeed, whether that means scoring 20 points or no points, and 10 assists. We have an extremely talented team across the board so it’s not about individual stuff this year.”

Collett, a leading candidate for 2020 Kentucky Miss Basketball who is already the school’s all-time leading scorer, has never played in the state tournament. But South Laurel has the tools – including two other senior standouts in Amerah Steele and Sydnie Hall along with a veteran head coach in Chris Souder (who won two state titles at Mercer County High) – to compete as one of the top contenders for the regional tournament crown this season.

“If we win region and make it to the state tournament, it would be a dream come true,” she said. “I love this team which is another reason why this accomplishment would be so special to me.”

The well-mannered Collett, who spent one year in Middlesboro as a fifth grader, is proud of her mountain heritage. Over the years, the eastern part of Kentucky has produced a good share of star players like ex-Wildcat standout Maci Morris (Bell County High), UK’s Blair Green (Harlan County), Tennessee Tech’s Jordan Brock (Harlan), among others.

“I’m very honored to be from the same region as those extremely talented girls and to be among the few that pursue their basketball career past the high school level from the mountains,” said Collett, an excellent passer who also led the state in assists (7.0 per game) last season. “I think it shows how underrated players from the mountains are.”

Her father, Landry Collett, grew up in the same area, too. He was a four-sport standout at Leslie County High School during the early 1990s. He also played football and basketball with future Wildcat and NFL star Tim Couch at the Hyden school.

By the way, the elder Collett is an assistant coach at South Laurel and his daughter doesn’t mind. Even though he is very demanding, Ally is grateful for his valuable guidance.

“My dad has coached me since the second grade,” she said. “He is super hard on me, but I think him pushing me has made me the player I am today. I’m so thankful for the impact he has had on my basketball career.”

Over the years, Ally was also very active in AAU basketball and she played for Kentucky Premier 17U EYBL team recently.

As for her collegiate career, she has already decided on her destination after considering several NCAA Division I offers. As you may know, Collett is going to Western Kentucky University. She made the commitment back in September 2018 and is scheduled to sign with the Lady Toppers in mid-November.

She added Western Kentucky is the best choice since “their family- and home-like atmosphere attracted me to WKU. It’s the best school ever.”

Collett and her family recently traveled to the university in Bowling Green on her official visit.

While the class of 2020 in Kentucky features several talented prepsters, Collett is one of the top candidates for Miss Basketball honors even though she plays away from the bright lights of Louisville, Lexington and northern Kentucky.

“It is a huge honor to be a Miss Basketball candidate,” she admitted. “It means a little more being from the mountains. I love this sport and it’s crazy to think how many doors it has opened for me. It’s an honor to just be a candidate.”

Collett and her South Laurel teammates will tip off their 2019-20 campaign on the road on Monday, Dec. 2 when the Lady Cardinals visit Lincoln County in Stanford.

Jamie H. Vaught, a longtime columnist in Kentucky, is the author of four books about UK basketball. He is the editor and founder of KySportsStyle.com magazine and a professor at Southeast Kentucky Community and Technical College in Middlesboro. You can follow him on Twitter @KySportsStyle or reach him via e-mail at KySportsStyle@gmail.com.