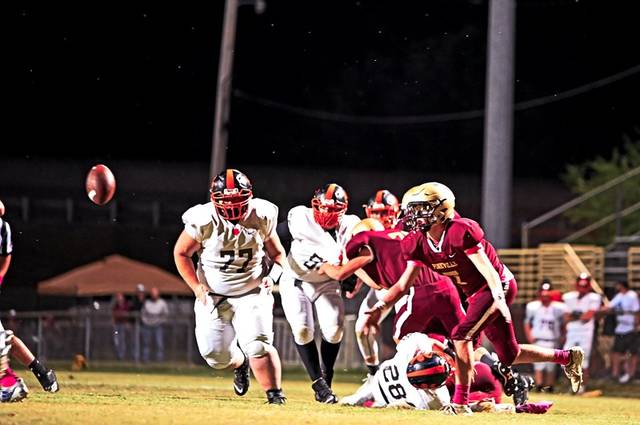 Reece Capps chases after a fumble in a game against Lynn Camp earlier this season in Pineville.

The Pineville Mountain Lions are looking to close out their regular season with their eighth win of the year against Sayre at home this week. The Mountain Lions have amassed a 7-2 record on the season with wins over teams such as: Lynn Camp, East Ridge and Harlan.

Pineville has been running the ball extremely well this year, accumulating 2,784 rushing yards and 35 rushing touchdowns as a team. The Mountain Lions have been struggling in the passing game this season, tallying only two touchdown passes to six interceptions.

On the opposite hand, Sayre has struggled mightily on offense, especially in the running game, accumulating only 471 yards and four touchdowns rushing this season. Their leading rusher only has 216 yards for the whole season. In the passing game, they have tallied 1,092 passing yards with 10 touchdowns and seven interceptions.

The Pineville defense has done a good job all season of locking down their opposition, allowing only 126 points all season. The Mountain Lions have allowed 14 points or less in all but two games this season, both of which were losses. They have racked up 470 total tackles as a team with 15 tackles for loss and 15 sacks. They also have 15 takeaways on the year, with one takeaway being returned for a touchdown.

Sayre has given up 186 points this season while only managing to score 116. In all but three games this season, the Spartans have allowed 21 points or more, and lost all of them.

The Spartans have a record of 1-6 this season. This is only their second season with a football team, according to records from the KHSAA website.

If Pineville wins, they will close the season at 8-2 before hosting Lynn Camp in the opening round of the 1A KHSAA playoffs. The Mountain Lions defeated the Wildcats earlier this season in a defensive slugfest, 14-6.