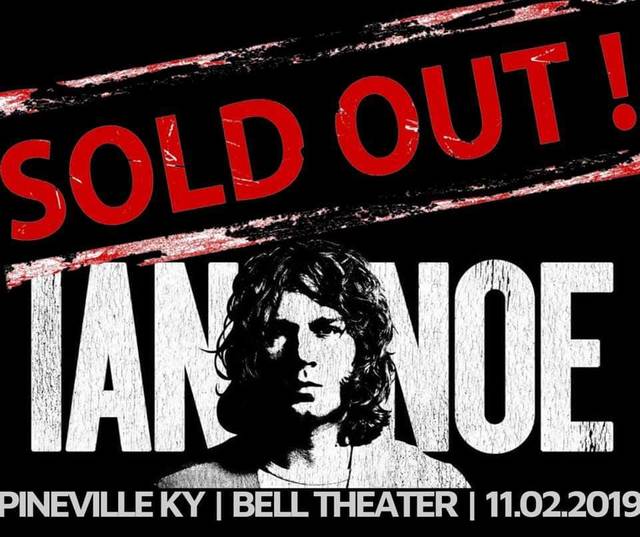 The first show for the Bell Theater Music Series featuring Ian Noe is a sold out event.

Beattyville native Ian Noe concludes his first national headlining tour with sold out show at the Bell Theater on Saturday. The doors for the Bell Theater will open at 6 p.m. with music starting at 7 p.m. There are no tickets available at the door as the show has been sold out for over a month.

The show will be opened by West Virginia native Charles Wesely Godwin (who recently performed at the Cumberland Mountain Fall Festival) and Austin, Texas based songwriter The Hill Country Devil.

This marks the first show of this year’s Bell Theater Fall and Winter Concert Series, which is now in its third year and is collaboration between Main Street Pineville and Bell County Tourism.

“What an incredible way to kick off this year’s series. Ian is undeniably one of the most talented artists to call eastern Kentucky home, and that’s saying a lot.” Tourism Director Jon Grace said. “It means so much to us for him to conclude his first headlining national tour in his home region. We’ve been looking forward to it for quite some time.”

Kentucky has a music scene unlike anywhere else in the nation right now. It seems like every other month, another talent from the bluegrass state is garnering national buzz. For those in the Commonwealth’s music community, the name Ian Noe is one that most folks will tell you is next in line for the big time.

The Beatyville native released his critically acclaimed album, ‘Between the Country’ earlier this year. The album is filled with songs containing colorful characters inspired by Noe’s eastern Kentucky upbringing. Rolling Stone, who debuted the album stream, calls it “a stunning statement through and through, full of breathless moments of defiance and despair.” His talent is such that legendary producer Dave Cobb (Chris Stapleton, Jason Isbell, Sturgill Simpson, etc.) actually sought Noe out personally to produce his debut album.

Noe brings listeners to mind of John Prine and Bob Dylan’s folk prowess with a twinge of Springsteen’s rock n roll bubbling just under the surface. He, in fact, often performs a spellbinding version of the Boss’ “Born in the USA” at shows. He has seen his popularity skyrocket as of late, opening for John Prine, playing large festivals and even making a superfan out of Aquaman and Game of Thrones star Jason Momoa and appearing on his YouTube channel.