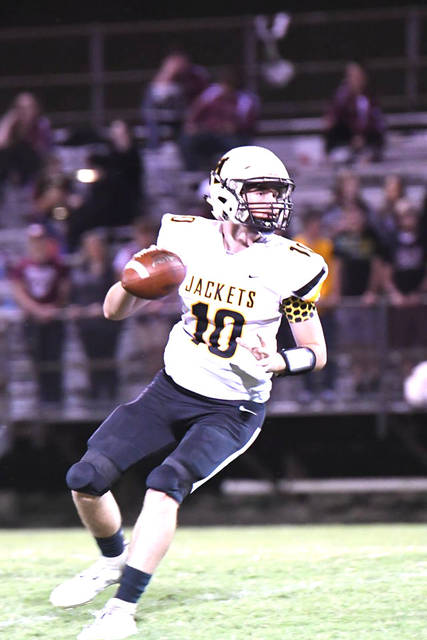 Eric Helton drops back for a pass during a previous game this year. Middlesboro will close out their regular season on Friday at home against Martin County.

The Middlesboro High School football team has had quite the successful season in Larry French’s inaugural year with the Yellow Jackets. Middlesboro has amassed a 7-2 record this season after only winning five total games from 2015-2018.

On the other end of the spectrum, Middlesboro’s final regular season opponent, Martin County, has not played in many close games this season. Their closest game was a 16-point win over Magoffin County back in August. According to the 13th Region Prep Football page on Facebook, Middlesboro is favored by a single point. With their experience in close games this season, if this game comes down to the wire, the Yellow Jackets could be in good shape.

The Cardinals come into this game with a 6-3 mark on the season with sizeable wins over Phelps, Bath County and East Ridge. In all three losses this season, Martin County has allowed at least 37 points.

The Cardinals don’t have a very explosive offense. They have only managed 398 yards of passing this season with five passing touchdowns and five interceptions. They have accumulated 2,174 rushing yards on the season, averaging 241.6 rushing yards per game as a team with 30 total touchdowns.

Middlesboro has accumulated 284 points on the season while limiting their opponents to a season total of 231 points up to this point. The Yellow Jackets have totaled 492 tackles on the year with 36 being for loss. They have 17 takeaways on the season with four of those being returned for touchdowns.

This game will feature two teams with very similar play styles and philosophies. Each team will finish with a better record than what they finished with last season. Middlesboro has already improved upon their 1-10 mark from a year ago, and there is no record of Martin County having a team last year.