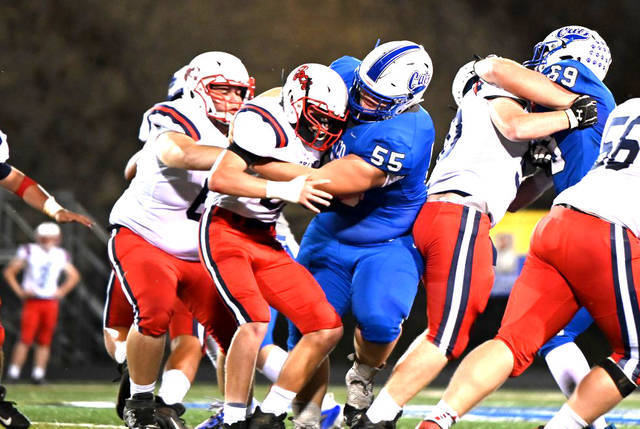 Seth Lester brings down a ball carrier during Bell’s victory over Rockcastle County earlier this season. The Bobcats will host Harlan County in their regular-season finale on Friday.

The Bell County Bobcats have rolled to nine straight victories this season. Behind 2,587 rushing yards and 415 total points scored, the Bobcats have burned through every opponent up to this point this year, with their closest victory being a 14-point decision against 4A Knox Central back in August.

Bell County will face their toughest test of the season when the 4A Harlan County Black Bears make the trip to Log Mountain this week for the final game of the regular season.

The Black Bears have had an impressive season with wins over teams such as Hazard, Knox Central and Clay County. Behind 1,889 rushing yards and 251 points scored, the Black Bears have amassed a 7-2 record on the season, with both losses coming to teams with one loss between them — Johnson Central and Wayne County.

Harlan County has given up 227 points, 1,108 passing yards and 1,230 rushing yards on the season. They’ve racked up a total of 532 tackles on the season with 67 of those being for a loss of yardage. The Black Bears have taken down the opposing quarterback 15 times this season, have only one interception and have forced seven fumbles — five of which they recovered. Harlan County has only scored once on the defensive end of the ball this year.

Bell County’s defense has only allowed 107 points through nine games this season, which averages out to roughly 12 points-per-game. The Bobcats have allowed 530 passing yards and 985 rushing yards this season. As a team, they have tallied a total of 538 tackles, 46 of which were for loss and have accumulated 18 sacks on the season. Bell County has 18 takeaways on the season and two defensive touchdowns. They also have two special teams touchdowns this season, both coming on kickoff returns.

With only one common opponent on their schedule this season, Knox Central, there isn’t much else to use to compare these two other than stats. Harlan County defeated Knox Central by one touchdown and the Bobcats downed the Panthers by two touchdowns.

The season finale for these two teams should be an explosive one. Both teams have hard-hitting defenses with well lead and balanced offenses. If Bell County is able to walk away with victory, they would be 10-0 heading into a first round playoff match up against Garrard County — who they defeated earlier this season 39-0. If the Black Bears take the “W,” they will improve to 8-2 on the season as they prepare for Clay County, who they defeated earlier in the season 21-7, in the opening round of the 4A KHSAA playoffs.