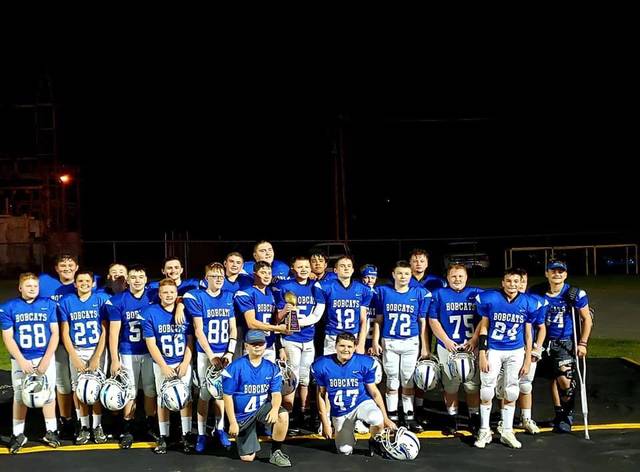 The Bell County middle school football team finished their season with a record of 9-4 after falling to Corbin in the regional championship game.

The Bell County middle school football team wrapped up their season on Saturday in the regional championship game against the Corbin Redhounds. Corbin defeated Bell County 46-8. The Bobcats had a great season with an overall record of 9-4, including a big win over Knox Central in the opening round of the regional tournament.

Bell County’s Daniel Thomas was named the Region 4, Division 2 Player of the Year and was described by coach Darrin Clark being the work horse of the team.

“The season didn’t end the way we wanted it to,” said Clark. “We definitely felt like we deserved to be there. This is a very hard working group of young men, and I’m very proud of them. We got a little shell-shocked in this last game, I think. Corbin jumped out to a 24-0 lead before we knew what hit us. We were just never able to make it back into the game.”

“We are very happy that Daniel was named the regional player of the year. He is our work horse and did a great job for us all season. This is a team sport and everyone did their part, but he did a great job of being a leader and always trying to make those around him better.”

Looking forward to next season, Clark believes he has plenty of talent coming back next year and believes the older boys that are moving on are ready for football with coach Hilton on Log Mountain.

“We are already looking ahead to next season,” said Clark. “We are trying to ‘game plan’ so-to-speak for next season already. We feel like we have a lot of talent coming back next year and expect to have just as good of a season as we had this year. We have some guys moving up to high school football and they’re excited about it. Most of them attend every single high school game at home and have been looking forward to playing for coach Hilton for a long time.”

Clark believes that the future of football in the area looks very bright.

“There is a lot of talent around here,” said Clark. “You can look around to all the high school programs and see that they’re all successful this season. I think it goes to show that football in Bell County as a whole is on the rise. I’m very proud of these guys this season and I’m looking forward to next season as well.”

Clark also believes that he wouldn’t have been able to have such a good season without the support of the players’ parents and the community.

“The parents and the people in the community were awesome all year,” said Clark. “They were very supportive, traveled to a lot of games and always made sure we had what we needed. I’m thankful to all of them.”