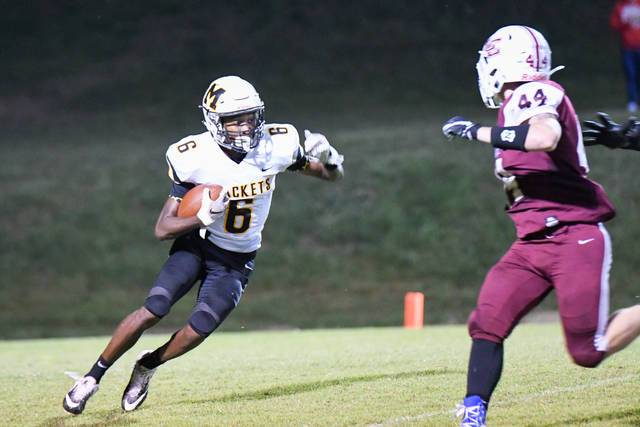 Jabari Kyle cuts upfield around a defender in a previous game. Kyle had 180 rushing yards and three touchdowns in a victory over Knott Central on Friday.

With the victory, the Yellow Jackets have won three games in a row for the second time this season. Middlesboro defeated Lynn Camp, Harlan and Pineville in successive games earlier in the year. Since a loss to Breathitt County in late September, Middlesboro has defeated Leslie County, Morgan County and Knott County Central in successive games to give them their second three-game winning streak of the season.

In the victory over Knott Central, the Yellow Jackets were led by Jabari Kyle, who had eight carries for 180 yards and three touchdowns. Caleb Bogonko and Atavius Flanary each added a rushing touchdown.

Quarterback Eric Helton played a very efficient game, completing 3-of-3 passes for 66 yards and a touchdown. Ethan Barton led the Yellow Jacket receivers with one reception, which was good for a 43-yard touchdown. Thaisan Sin connected on 5-of-6 extra points.

The Yellow Jackets put up 424 total yards of offense while holding Knott Central to just 211 yards of total offense during the game. Middlesboro now ranks fifth in the 13th region RPI rankings behind Harlan County and ahead of Pineville.

“Any time you can get a win on the road is a good thing,” said Middlesboro coach Larry French. “With this win, we will be able to host a playoff game at home, which is a very big deal. Having your home crowd and your home field in the playoffs is something that you don’t get too often, and we are glad that we earned that. I’m proud of the way we are playing right now, but we can’t get satisfied. We have another game to worry about this Friday, and that’s where our focus is.”

“This is a close-knit group of guys,” said French. “They’re very comfortable around one another and play well as a team. They’re a very coachable group and do what we ask them to do. Their desire to win is pushing them to play to the best of their capabilities this season. We are going to stay focused and finish out strong.”

With the victory, the Yellow Jackets improved to 7-2 on the season. They will take on the Martin County Cardinals (6-3) on Friday night at home in their last regular season game.