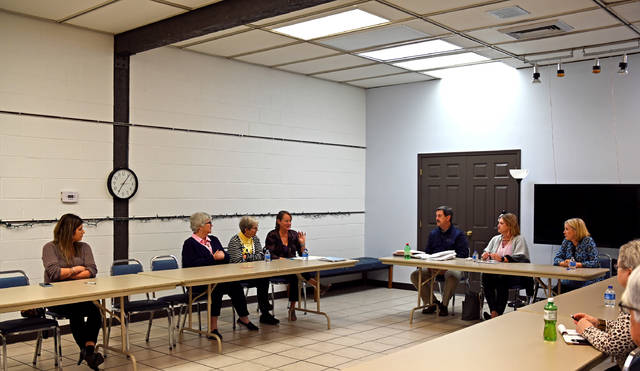 Education and prevention was the topic of last week’s League of Women Voter’s third town hall meeting that focuses on the drug epidemic in Bell County.

Education and prevention was the topic of last week’s League of Women Voter’s third town hall meeting that focuses on the drug epidemic in Bell County.

Special guests for the evening were Deborah Hampton from Regional Behavior Center, a part of the agency that is typically referred to as CompCare, Farah Shoffner from the Youth Service Center for Middlesboro Middle School and Tom Vicini from UNITE.

Each described programs already in place and those planned or at least hoped for.

All agreed that prevention is the most important part of the puzzle since every dollar spent on preventative programs saves at least $8 spent on treatment. However, so far most of the federal dollars have gone to treatment.

Hampton was enthusiastic about a program, “Too Good for Drugs,” which her agency provides free to school districts that request it.

“It is evidence based and has age appropriate programs for grades K – 12,” Hampton said. “In the early grades, the emphasis is on setting goals, building skills to deal with problems and on making responsible decisions.”

Hampton said that in later grades there is more emphasis placed on refusal skills, problems stemming from social media and drug education.

“Bell County has already implemented the program in five schools,” she explained. “Middlesboro is planning to have it in their schools by spring of 2020.”

Shoffner said the program was definitely needed, that it is shocking what many children in our community have to deal with. She cited the fact that many families have been ravaged by the drug epidemic.

“Forty percent of the children in the Middlesboro school system are being raised by a grandparent, great-grandparent or someone else other than a parent,” she said. “Though this care can be very good, the grandparent frequently has his or her own health problems plus may be out of touch with many of the recent trends, such as social media, that challenge children.”

For that reason, the school system will be sponsoring a support group for grandparents. Due to begin in December, it will be called Second Time Around and will help older surrogate parents understand the pressures faced by their young children.

Vicini said that during the more than 14 years he has worked with UNITE, he has seen their mission turn more from law enforcement to recovery and prevention. He was particularly concerned about the growing popularity of vaping among teenagers and even pre-teens.

“Though the vaping products may be packaged to look like candy, and even have candy-like flavors, almost all have some nicotine,” he explained. “As anyone who has tried to stop smoking knows, nicotine is addictive and particularly so for children. Often once they experience the ‘high’ that even small amounts of nicotine can give developing brains, they often progress to vaping products that contain more nicotine and even marijuana.”

He said that while not everyone who uses marijuana will progress to harder drugs, 95% of illicit drug users first used marijuana.

Shoffner agreed that vaping was now at problem even in middle school.

She further explained that middle schoolers have brains that are not fully developed, so it is an uphill battle to get them to make good choices. She and other counselors at the schools are actively addressing this problem. One parent in the audience commented that vaping was also a problem at an adult daycare center.

Vicini commented the makeup of the audience for this town hall meeting was symptomatic of the problem: many of people attending were professionals involved in some aspect of treating the drug problem or were part of an antidrug group.

“Where are the parents?” he asked.

Until more of the community becomes involved, he said, we cannot affectively deal with our drug epidemic.