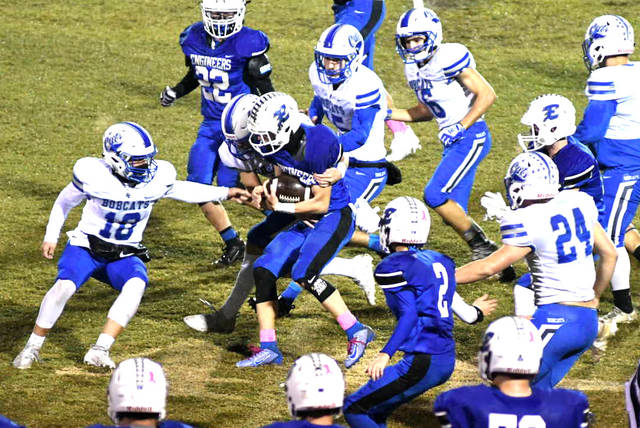 The Bobcats swarm an Estill County runner during Friday’s game. Bell County secured an undefeated district record with a 55-12 victory over the Engineers.

The Bell County Bobcats rolled to 9-0 on the season and wrapped up their district schedule on Friday night as they traveled nearly two and a half hours away to Estill County to take on the Engineers. Bell rode a strong rushing attack to a 55-12 victory over Estill.

“We improve in a few areas every week,” said Bell County coach Dudley Hilton. “But, there are still some areas that we need to work on a little bit. We met a very well prepared team in Estill County. They didn’t want to just host us, they wanted to beat us. They are very well-coached, and they’re a hard hitting football team. It was another good test for us from another good football team. I’m proud of the way we played and happy to get a win.”

Brandon Baker paced the Bobcats on the ground rushing for 132 yards and three touchdowns on 11 carries. Dawson Woolum tallied 69 yards and one touchdown on three carries, and London Stephney finished the night with 66 yards and a touchdown on six attempts.

Bell County began the game on defense, but quickly found themselves on offense after a quick interception in Estill territory. Two plays later, Stephney hit Jones on a 39-yard touchdown pass, giving Bell County a 6-0 lead that they would never relinquish.

The Bobcat defense answered the call again on the following possession, forcing and recovering a fumble at the Engineers’ own eight-yard line. On the ensuing play, Baker hit pay dirt from eight yards out. After a successful 2-point conversion, Bell County took a 14-0 lead.

After another strong defensive stand, the Bobcats found themselves back on offense and driving down the field by the end of the first quarter.

Just one minute and 13 seconds into the second quarter, Bell County struck again on a 21-yard rushing touchdown by Stephney. Another 2-point conversion gave the Bobcats a 22-0 lead.

With the rain pouring on the ensuing kickoff, the Engineers were unable to maintain possession of the ball, fumbling on their own 12-yard line. Bell County was able to fall on the loose ball and find the end zone on the next play, extending their lead to 28-0.

Estill County was able to score a touchdown on their following drive on a pass from Ty Niece to Ethan Webb, bringing the score to 28-6. Although they were able to work their way into the end zone, the Engineers still had trouble slowing Bell down.

On the following kickoff, just as quickly as Estill County’s hopes had been raised, they were dashed by a 75-yard return for a touchdown by Jonathan Lankford, extending the Bell County lead to 34-6.

Estill County was able to add six more points on a rushing touchdown by Justin Stamper with just 50 seconds to go before the half, bringing the score to 34-12 at intermission.

After the half, Bell County poured on 21 unanswered points, separating themselves from the Engineers, allowing them to post a 43-point victory in their final district game of the season.

The Bell County Bobcats will wrap up their regular season against the Harlan County Black Bears at home on Friday night at 7:30 p.m. With the victory over Estill County, the Bobcats secured the top-seed in their district and will host at least one playoff game on Log Mountain.