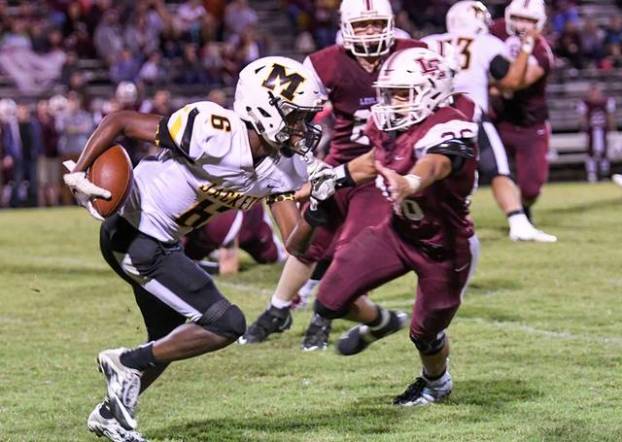 Jabari Kyle stiff arms a Leslie County defender during their OT victory in a previous game.

Quarterback Eric Helton played a very efficient and effective game for Middlesboro, completing 3-of-4 passes for 39 yards and one touchdown with no interceptions.

The Yellow Jacket defense found the end zone once as well. Jay West forced a fumble that was scooped up by Craig Brock and taken 61-yards for a touchdown. Landon Smith led the team in tackels with 11, including two tackles for loss.

Riley Gent followed closely with 10 tackles and two tackles for loss. He also added an interception. Jay West had nine tackles, three for loss and a forced fumble.

“We played an efficient game,” said Middlesboro coach Larry French. “We took care of the ball and didn’t turn it over. We looked good in all phases of the game. We did what we were supposed to do and it was a good win for us. We added some new wrinkles this week and they seemed to work out well. I’m proud of our defense for stepping up all night and doing what they needed to do to make stops. We attacked up front all night pretty well. It’s a good win for us.”

“We are going to go out and have a good week of practice this week and get some rest while we can,” said French. “It’s right back to work soon.”

With the victory, Middlesboro improved to 6-2 on the season. The Yellow Jackets will get a week of much needed rest this week on their bye week before an Oct. 25 match-up with Knott County Central on the road.