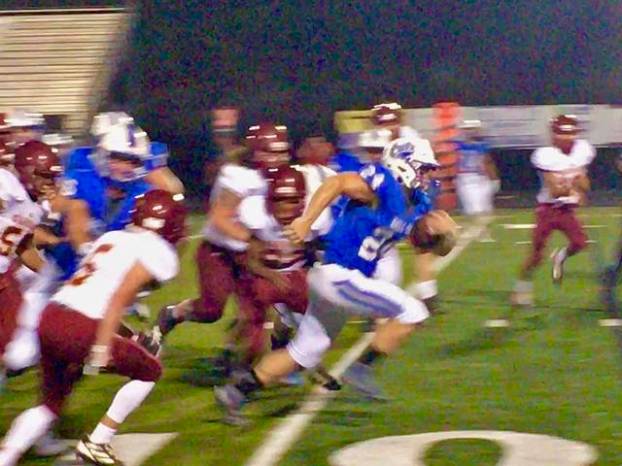 William Dean cuts up the field for a touchdown in Bell County’s 39-0 win over Garrard County.

From the opening kickoff to the final whistle, Bell County dominated all three phases of the game against Garrard County in a 39-0 rout of the Cougars on homecoming night.

Dawson Woolum took the opening kickoff back for a touchdown before the Bobcats added 33 more points in the first two quarters to take a 39-0 lead into halftime. With a running clock for the remainder of the game, Bell County was able to take their foot off the gas pedal and cruise to their seventh straight victory.

“This is the second straight game that we’ve had six different guys score in the same game,” said Bell County coach Dudley Hilton. “Our offense is doing a great job of spreading the wealth around. It keeps defenses on their toes when you have so many guys that can score. I’m proud of the way we executed the game plan and how we finished out the game.”

The Bobcat defense got as fast of a start as the offense by forcing and recovering a fumble deep in Garrard territory. William Dean found the end zone on Bell County’s first play of their second possession on a 16-yard run, giving the Bobcats a 12-0 lead 1:13 into the game.

After holding the Cougars to limited yardage on their following possession and forcing a turnover on downs, the Bobcats struck again on a 43-yard passing touchdown from Stephney to Jones, giving Bell County 20-0 lead after a successful 2-point conversion.

Garrard County began to find a small amount of success behind the legs of Jules Hale before they ran into the brick wall that was Bell County’s defense. After regaining possession, Brandon Baker scampered into the end zone on a 64-yard rushing touchdown, giving the Bobcats a 27-0 lead after a successful PAT from Jones.

On their first offensive play of the second quarter for Bell County, Stephney darted down the right sideline for a 44-yard run before being taken out at the half-yard line. On the ensuing play, Stephney stepped across the plane for six, extending the Bobcats’ lead to 33-0.

In what would be their final score of the night, Hayden Callebs spun his way across the goal line with just under five minutes remaining in the first half for six points to secure the 39-point victory after a successful PAT from Jones.

“We were able to get our backups in and get them some playing time,” said Hilton. “Staying healthy moving forward is crucial for finishing out the season. We still have some tough games coming up, but I’m very proud of how well we’ve played up to this point in the season.”

With the victory, the Bobcats improved to 7-0 on the season. Bell County will take on the Jackson County Generals on the road Friday.

Facing a must-win situation at the midpoint of the year and playing on a day celebrating the life and career... read more