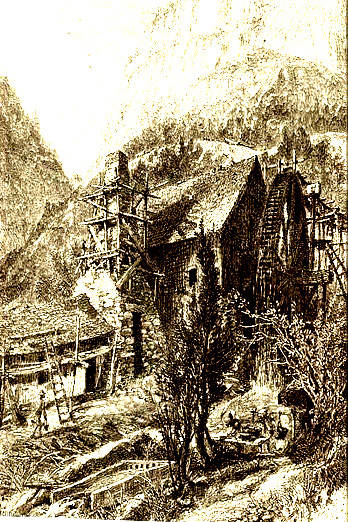 During “An Iron Will” festival, the community will step back in time and be able to immerse themselves in another fascinating chapter of the area’s rich history.

When visitors attend Cumberland Gap National Historical Park’s Oct. 18-19 “An Iron Will” festival, they will step back in time and be able to immerse themselves in another fascinating chapter of the area’s rich history. Two hundred years ago in 1819, an iron furnace was built below what is known as Gap Cave, utilizing for its operation the stream from the cave.

This new park offering, being held in the town of Cumberland Gap, Tenn., is a “jubilant celebration welding together the park, the town, area residents, and visitors with history, discovery, and fun,” said Park Superintendent Charles Sellars. During this same weekend, the town will also be hosting its annual “Geneology Jamboree and Pioneer Days.”

On his historic journey in 1750 through the now famed mountain pass, Dr. Thomas Walker made note of a spring coming from a cave. In his journal, he noted “The spring is sufficient to turn a mill.” 69 years after Dr. Walker penned his entry, the blast furnace was built. Large, sandstone blocks were used from nearby and fire brick was used to line the inside of the furnace which was used to smelt iron.

Iron ore was mined nearby, limestone was added in the process, and firewood was made into charcoal for use as fuel. Water from the cave stream powered large bellows and a massive hammer mill.

Each day 625 bushels of charcoal (approximately 52 trees), 6 1/4 tons of iron ore, and 1,563 pounds of limestone were used to produce approximately 3 tons of iron. Iron was sold to local blacksmiths and also shipped in the form of ingots or “pigs” down the Powell River to Chattanooga.

“An Iron Will” is made possible by a very generous donation from “America’s National Parks,” a not-for-profit cooperating association that promotes the public’s support of America’s national parks and other public trust partners.

Voting is a responsibility given to all citizens, and it provides individuals with a way to make their voice heard.... read more