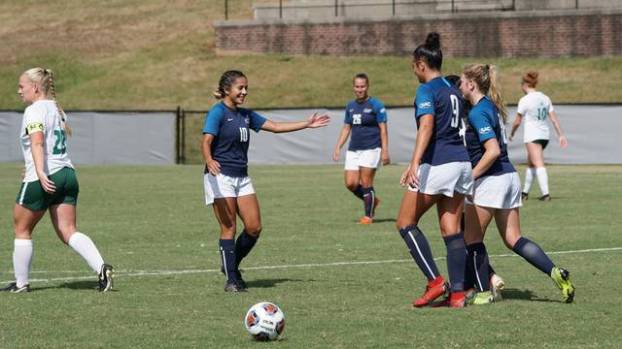 The lethal tandem of Jessica Cravero and Itzel Ballesteros got the five-goal first half started in the 16th minute, and from there the Lady Railsplitters never let off the pedal, scoring three more on Makayla Willets in the final 45 minutes en route to an 8-0 victory over the Bobcats at the LMU Soccer Complex.

HARROGATE, Tenn. — There was no stopping the Lady Railsplitters Wednesday.

Lees-McRae’s Hope Sanborn did everything she could in goal before the fierce Lincoln Memorial University offense swept through.

The lethal tandem of Jessica Cravero and Itzel Ballesteros got the five-goal first half started in the 16th minute, and from there the Lady Railsplitters never let off the pedal, scoring three more on Makayla Willets in the final 45 minutes en route to an 8-0 victory over the Bobcats at the LMU Soccer Complex.

The 8-nil win — featuring five different Lady Railsplitter scorers and six who registered assists — was the most lop-sided home win since LMU defeated Hiwassee 18-0 on Sept. 30, 2015, and it was the best this season, topping the season-opening, 6-0, shellacking of Chowan followed by the same result over Converse.

Also, the shutout victory was the second straight and the sixth of the season in 10 matches played as the Lady Railsplitters (8-2) play for the third consecutive when Catawba comes to town for a South Atlantic Conference matchup at 1 p.m. Saturday.

“We are getting better,” LMU head coach Sean Fraser said. “The best about it is that we’ve used the clips and examples we’ve had previously and said, ‘This is what we did before and this is how we fix it.’ We’ve worked on it in training. … It wasn’t about buy in; it was about execution. They know for me, first of all, I’m a coach that likes to defend first and get the shutout. They know that’s the important thing for me. Yes, we are an attacking team and we like to play the game on the front foot, but we are a defensive team first.

“I said to the players at the end, ‘You can put two together, but a good team now needs to be able to put three together.’ That’s our focus and now they have to be focused on Saturday.”

Before fast-forwarding to a key match this weekend, let’s relive the historic offensive havoc that took place Wednesday. Cravero’s score via the foot of Ballesteros was her first in three matches, snapping a cold drought and jumpstarting the LMU take over.

Less than two minutes after assisting Cravero’s eighth goal, Ballesteros found pay dirt at 18:35 as the senior took Fabienne Loetscher’s first assist through the middle, juking out the keeper for the 2-0 lead. The third score within 10 minutes came via Rachel Taylor as the sophomore took a cross through the box from Cravero and deposited for her first score since Sept. 10.

Ten minutes later, came a beauty as the speedy Daisy Drake raced by the defender, dribbling upfield with a Taylor assist before entering the box and driving the ball by the keeper and into the left corner for her first goal of the season.

Then there was Ballesteros doing Ballesteros things in the 44th minute. The forward finished her 45 minutes of play on a high note, recollecting possession by bouncing the ball off a Bobcat, and then taking the deflection up and into the goal for her sixth score and a 5-nil half-time lead. The score put her in a three-way tie in the SAC in goals while she is second behind Cravero’s 18 points with 16 of her own.

“Every year you change a lot of players and it’s kind of difficult to get to know each other, but the more we play together and the more we stay together,” JUCO transfer Ermelinda Pantaleao said. “Today was really cool to watch. Jessica and Itzel playing again because last year they had a great year and today they proved again they are coming back practice by practice and game by game. That feeling and the chemistry the team has, I can tell it is coming.”

The development of chemistry continues to grow each game for the Lady Railsplitters. Even with Fraser subbing in reserves throughout the second half of play, the connection and knowledge of the game plan was intact. It is also noteworthy that Jessica Steen saw the field for the first time since last season when the now senior went down with a season-ending injury, adding yet another piece to LMU’s drawing board.

It was Taylor who opened the final 45 minutes with her team-tying, second-most sixth score — along with Ballesteros to sit tied for the third most in the SAC — from the foot of Thenia Zervas, who now has her conference-leading and nation-leading ninth assist in the 51st minute.

“We have Thenia who is going to control the ball and give passes,” Pantaleao said, “and then we have a Daisy that is going to speed up the game for us.

“We proved when we are good at practice, we are good on the field, too,” Zervas added. “We moved the ball around and then moved high and scored a lot of goals.”

The complete-team feel continued as Cravero netted her second goal in the 68th minute, joining Ballesteros and Taylor as multi-goal scorers and putting the Italian as the conference’s leading scorer with eight on the season.

Lauren G Woodcock joined the fun, too, as the sophomore transfer stuck her second goal of the season in impressive fashion, scoring via a free kick to complete the 8-nil victory.

“You can talk about Rachel in her natural position, two forwards scoring goals, Thenia on the left side and gets an assist again,” Fraser said, “Daisy Drake flying on the other side and the two midfielders underneath in Mariana Diaz and Maria Hernandez just doing what they are doing.

“It was us being us. That’s what you want. Lots of productivity today. We like it; it’s awesome.”