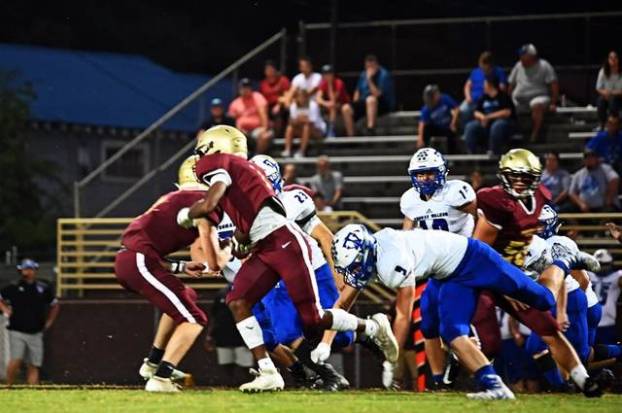 Scooby Morris rushes around the edge for a big gain against Thomas Walker. Pineville will open their district schedule against Lynn Camp on Friday.

Pineville gears up for Lynn Camp

The Pineville Mountain Lions are coming off of an important bye week. With so many players banged up, a much needed rest will benefit a Lions team that has already found an immense amount of success this season.

Barring a one-point loss to in-county rival Middlesboro, Pineville has defeated every other opponent on its schedule up to this point in the season.

The Pineville passing game has struggled this season with only two passing touchdowns to five interceptions. However, the tandem of Colby Frazier and Devon “Scooby” Morris has been the strength of the Lions’ team.

Frazier, Richard Beverly and Timothy Gambrel have anchored Pineville’s defense this season. Frazier leads the team in tackles with 41, including one sack. Beverly has 37 tackles and a sack. Gambrel has 34 tackles, one sack and two tackles for loss.

The Mountain Lions have their eyes on the 2-3 Lynn Camp Wildcats this Friday night.

In all three of Lynn Camp’s losses this season, they have allowed over 28 points-per-game. With Pineville averaging 29 points-per-game, the Wildcat defense will have to step up to slow the Lions.

If Pineville is able to prevail over Lynn Camp, they will improve to 6-1 on the season before a huge clash with 4-2 Williamsburg on the road on Oct. 18.

Coming off of an emotional comeback victory in overtime against Leslie County last week, the Middlesboro Yellow Jackets have their... read more