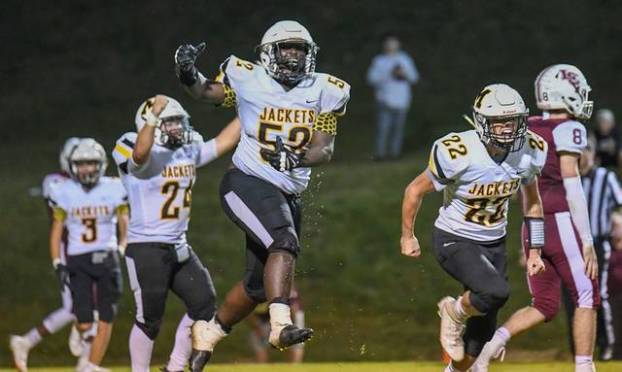 The Middlesboro Yellow Jackets celebrate after an emotional comeback victory over Leslie County on the road last Friday in overtime. The will play Morgan County on Friday.

Coming off of an emotional comeback victory in overtime against Leslie County last week, the Middlesboro Yellow Jackets have their sights set on the 0-7 Morgan County Cougars.

The Cougars come into Bradner Stadium winless on the season after falling to Breathitt County 35-6 last Friday.

For the second time in the season, Middlesboro was able to triumph in overtime during their last game, giving them momentum heading into this game.

With the victory, Middlesboro improved to 5-2 on the season, matching their win total for the last four seasons.

The Yellow Jackets are averaging 221.8 rushing yards per game and 78 passing yards per game. However, over the course of the last three games (with the exception of Breathitt County) Middlesboro has been more balanced on offense.

Excluding the loss to the Bobcats, Helton is 13-of-25 passing for 125 yards and two touchdowns with no interceptions. Kyle has over 250 all-purpose yards in those same games, with two touchdowns.

If Middlesboro takes care of business against Morgan County, they will improve to 6-2 on the season before a bye week followed by a road trip to Knott County Central on Oct. 25.