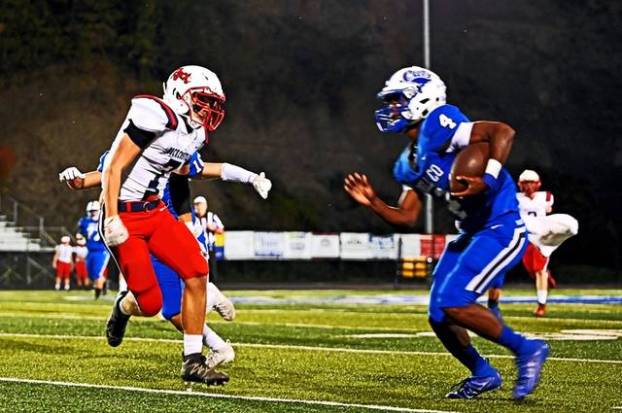 London Stephney picks up a first down against Rockcastle County. The Bobcats’ district schedule continue on Friday against Garrard County.

The Bell County Bobcats have dominated every facet of every game they have played this season. Coming off of a blowout victory over Rockcastle County, 39-6, the Bobcats are now fixed on the 4-2 Garrard County Golden Lions.

Bell County has been rolling on offense this season, averaging 46 points-per-game including an 80-point performance against South Laurel earlier this season.

The Bobcat defense has been just as good, allowing only 16 points-per-game.

Bell County is averaging just under 300 rushing yards per game and 111 passing yards per game. Quarterback London Stephney has completed 37-of-57 passing on the season with six passing touchdowns and only one interception. He has also carried the ball 49 times for 465 yards and seven touchdowns.

Coming into this game, Garrard County is riding a two-game win streak, including a 38-6 victory against McCreary County Central last Friday.

In each loss for the Golden Lions this season, they have allowed over 34 points-per-game, well shy of what the Bobcats are averaging through this point in the year.

Garrard County is very one dimensional, with only one passing touchdown this year as opposed to 27 rushing touchdowns. With Bell County allowing just over 100 yards-per-game on the ground, the Bobcats should be able to contain the Golden Lions on Log Mountain on Friday night. The game is also Bell County’s homecoming game.

If the Bobcats prevail over Garrard County, they will improve to 7-0 on the season.

Pineville gears up for Lynn Camp

The Pineville Mountain Lions are coming off of an important bye week. With so many players banged up, a much... read more