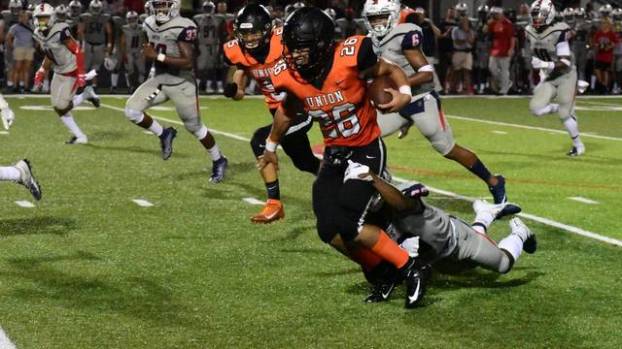 A Union runner tries to run through a tackle during their game against Bluefield on Saturday. The Bulldogs lost 57-14.

BLUEFIELD, W.Va. — The start of Mid-South Conference (MSC) Appalachian Division play got off to a rocky start as host Bluefield College (Va.) handed Union College a 57-14 defeat on Saturday. The game was played at Mitchell Stadium in Bluefield, W.Va.

With the loss, Union falls to 0-6 overall and 0-1 in MSC Appalachian play. Bluefield is now 1-4 overall and 1-0 in divisional action.

Bluefield raced to a comfortable lead and never looked back. The Rams scored the first 35 points of the evening with quarterback Aiden Wilder tossing four touchdown passes in the process. The scoring passes covered 30, 69, 28 and 7 yards as Bluefield led 35-0 with 56 seconds to play in the half.

Union responded quickly, needing only 23 seconds to cover 59 yards for a touchdown. Kendrick Furness hooked up with Immanuel Dawsey for a 31-yard scoring strike.

However, Tyrice Henry returned the kickoff 93 yards to give Bluefield a 41-7 halftime lead.

The Rams added a pair of rushing touchdowns and a safety in the second half, and the Bulldogs closed out the scoring with a Drew Carson 2-yard scoring run.

Union had its best night of the season rushing the ball, collecting 178 yards on 35 carries. Carson led Union with a season-high 62 yards.

Demonte Ball led the Union defense with 11 tackles with 2.0 going for a loss of eight yards.

Earl Wells hauled in five passes for 46 yards, giving him 27 receptions for 410 yards on the year.

The touchdown reception was Dawsey’s second of the year.

For the second time this season, the Middlesboro Yellow Jackets have won a game by one-point in overtime in comeback... read more