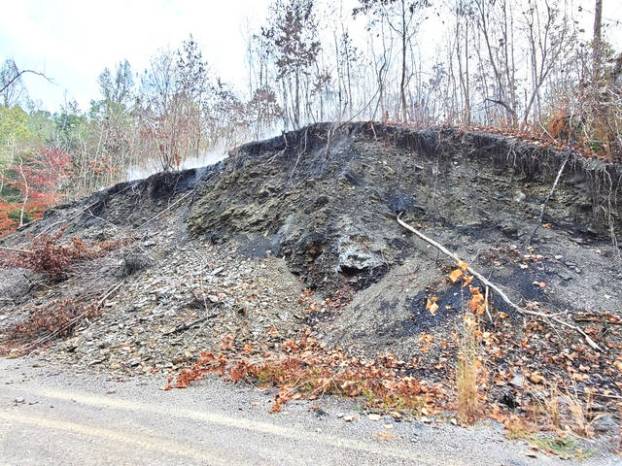 Pictured is the old slate dump that was located near Low Ash Hollow on Old Pineville Pike. It is believed that the dump is causing the mysterious smell the community has been asking about.

The mystery of the smell near the Meldrum area of Middlesboro has been solved. On Thursday, Bell County Emergency Management Director Ben Barnett announced that the smell is coming from an old slate dump located near Low Ash Hollow on Old Pineville Pike.

Barnett said the dump is basically debris out of a mine. He said he wasn’t for sure what caused the dump or how long it has been there.

“It’s been there long enough that there are trees growing out of the top of it,” said Barnett.

Once the slate dump was discovered, Barnett said he reported it to the Division of Abandoned Mine Lands because it falls under their purview. It would be up to them if they want to clean it up.

Barnett also said that he reported it to the Division of Forestry because he is a little concerned about the potential of a forest fire with as dry as it has been.

“It’s just smoldering. There are no flames or anything,” said Barnett. “The guy that lives near it said that it did flame up on him a few days ago. That’s why I’m a little bit concerned.”

Barnett said from here, it’s the Division of Abandoned Mine Lands’ decision in regards to the cleanup.

The fact that the dump is still burning is not surprising to the emergency director. Barnett said that these dumps can burn for years as long as there is enough fuel.

With that said, the question as to the mysterious smell in the area has been answered.

Photos submitted to The Big One 106.3 Several Lamborghini’s stopped by the Shell gas station at the corner of U.S.... read more