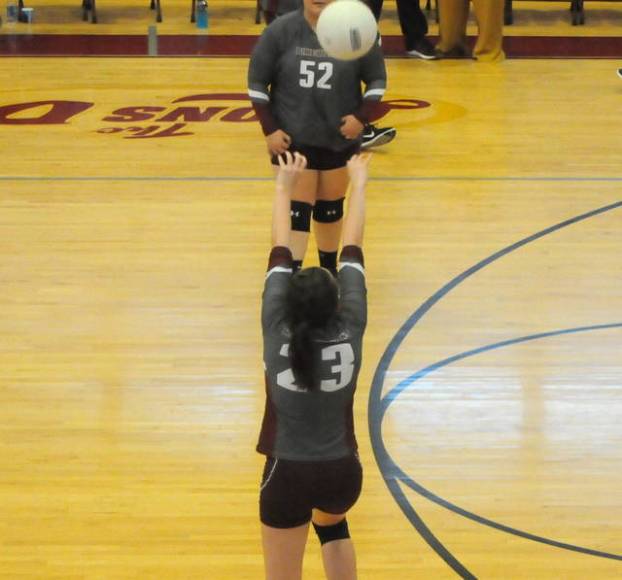 Summer Partin sets up a teammate during Pineville’s victory over Bell County on Thursday.

After having won only one of their last seven matches, the Pineville Lady Lions’ volleyball team found their way back into the win column against the Bell County Lady Cats on Thursday in Pineville. After falling behind two sets, Pineville battled back to defeat Bell County in five sets, breaking the Lady Cats’ six-game win streak.

“I’m just so happy for the girls,” said Pineville coach Samantha North. “We have 11 seniors on our team and we have had a tough year with injuries and sickness. They came into the game knowing Bell County was on a streak, and dropping those first two sets just made them want it more.”

“Bell deserves a lot of credit,” said North. “They are a great team, but I don’t think anybody could have beaten us after we got that fourth set. We had several girls come off the bench and give us critical minutes, and our seniors led rally after rally. This really was a team win.”

With the win, Pineville improved to 4-12 on the season. The Lady Lions will be back in action on Monday at home against Oneida Baptist Institute.

With the loss, Bell County’s streak of six straight wins was broken, and they moved to 7-4 on the season. The Lady Cats are back in action against Harlan on Monday at home.

The countywide All-Decade Team…kind of [Part 2]

Last week, I took the notion to go back in time and select my version of the countywide All-Decade team.... read more