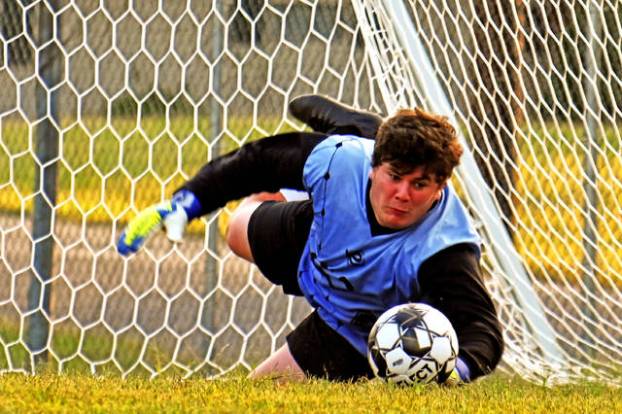 Braden Ausmus makes a save in Middlesboro’s victory over Barbourville on Thursday.

The Middlesboro boys soccer team bounced back from their 3-4 road loss against Whitley County on Tuesday by downing the Barbourville Tigers 5-3 Thursday afternoon.

“It was a good response to the Whitley game,” said Middlesboro coach Tim Millet. “In that game, we were a little gassed, tired and under-manned. It was a tough loss in Whitley County. We started slow this game, after we beat them pretty well last time. I told them that Barbourville would be better.”

“I had to make some adjustments at halftime,” said Millet. “We have to play every game as a team and play solid defense. I told the guys that we aren’t really good enough to just come out and beat people, no matter who they are. We have to stay focused and work hard. The second half of the Whitley game, we broke down defensively and did the same in the first half of this one.”

The Yellow Jackets have scored five or more goals in three of their seven games this season and have not allowed more than four goals in a single game all season. With the victory, Middlesboro improved to 5-2 on the season. The Yellow Jackets will be back in action Tuesday on the road against Harlan.

After having won only one of their last seven matches, the Pineville Lady Lions’ volleyball team found their way back... read more