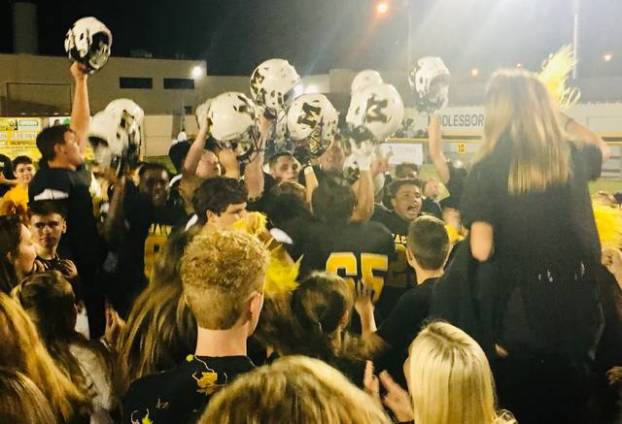 Players, cheerleaders and students celebrate on the field after Middlesboro’s dramatic comeback victory over Pineville on Friday night.

After trailing 13-0 at halftime, the Middlesboro Yellow Jackets fought their way back into the game, took the lead and escaped Bradner Stadium with a 20-19 victory on Friday night over in-county rival Pineville.

“We told the guys at halftime, just settle down and control your emotions,” said Middlesboro coach Larry French. “We told them to just go out and play football like they’re capable of playing. We ended up getting a timely score on a big pass and got ourselves on the board, that helped us gather a little bit of momentum. The players started believing in themselves more and we started executing like we are capable.”

“Our defense made some good stops in the second half,” said French. “I felt like conditioning was a factor in the fourth quarter a little bit. Our kids rose to the occasion and put some points on the board and we come away with a hard-fought win. I know it’s a disappointment for Pineville, but they’re a good football team, no doubt. They’re going to win plenty of more ball games. Any time you have a rivalry game like this, there are going to be emotions spilling over, you’ve got to grow from this and learn that you can’t do things like that.”

“We had a chance at the end to win the game,” said Pineville coach Randy Frazier. “That’s not where the game was lost — It was lost on our penalties. We lost 10, 15 or 20 yards on every penalty tonight. We go up 19-0 in the second half and penalties ended up killing us tonight. I don’t know how many flags were thrown in this game against both sides. I’m not complaining and saying that it was just against us, there were a lot of penalties on both teams, I just think you should let the kids decide the outcome.”

“We knew coming in that we wanted to run the ball at them. I thought we did a good job of running the football, we took a lot of time off the clock. For the most part, I thought we contained them well, we just didn’t make enough big plays in the second half. We had a couple of very costly penalties. It’s tough when that stuff happens, but you have to overcome that. I’m not blaming anyone — that’s on us on this side. We’ve talked about needing to clean up penalties after our first two games this season. You just have to be able to overcome adversity in that situation.”

Pineville took a 13-0 lead into the locker room at the half, before scoring a touchdown in their opening possession of the second half, giving the Lions a 19-0 lead after missing the PAT.

Middlesboro answered back with a 40 yard touchdown pass from Eric Helton to Ethan Barton to give the Yellow Jackets their first points of the game. After a missed PAT, Middlesboro trailed Pineville 19-6 with just over four minutes remaining in the third.

With Pineville driving down field, Barton came up with an interception for Middlesboro, granting the Yellow Jackets possession from their own 34 yard line, trailing 19-6 with 1:30 remaining in the third quarter.

After regaining possession two very hard runs from Riley Gent and a 36 yard scamper by Jabari Kyle gave the Yellow Jackets the ball inside the five yard line. On the ensuing play, Helton worked his way into the end zone on a quarterback keeper from the one yard line with five seconds remaining in the third quarter. A successful Thaisan Sin PAT brought the score to 19-13 in favor of the Lions.

After pinning Pineville deep into their own territory for most of the early fourth quarter, Middlesboro came up with an interception by Kyle.

After two big penalties, the Yellow Jackets were faced with a long 2nd & 28 from the Pineville 43 yard line before the Lions were assessed a personal foul penalty, giving Middlesboro a more manageable third down, still with 17 yards to gain the first down.

After another penalty from Pineville, Middlesboro was faced with a third down and three to go, when Helton scampered across the line to gain for a first down inside the Lions’ 10 yard line. Helton again rushed, gaining nine yards and lost his helmet and had to come out. On the ensuing play, Kyle found the end zone on a one-yard touchdown run, tying the game at 19. With another successful PAT from Sin, Middlesboro took the lead for the first time all game with just over one minute remaining.

With the Lions driving down the field, the Yellow Jacket defense came up with a big interception from Tyler Kelly, allowing them to drain the clock the rest of the way out and secure a 20-19 victory at home.

With the victory, Middlesboro improved to 4-1 on the season and will meet Breathitt County at Bradner Stadium on Sept. 27.

With the loss, Pineville moved to 4-1 on the season and will square off against Thomas Walker (VA) at the Lion’s Den on Sept. 27.