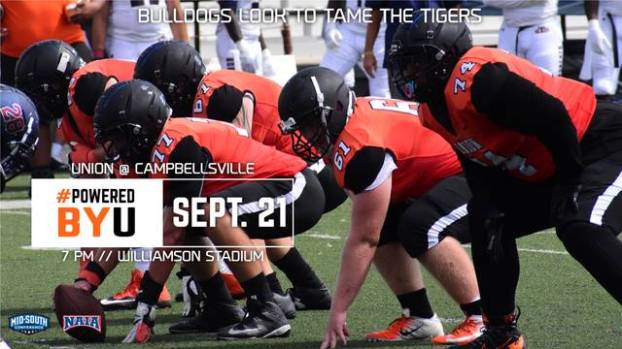 Both teams are seeking their first win of the season as Union is 0-3 and Campbellsville is 0-2.

This is the 29th meeting between the two squads with Campbellsville holding a 16-12 edge. In the last eight meetings, the teams are 4-4.

The Bulldogs won the last meeting, a 47-40 shootout on Sept. 10, 2016, in Campbellsville. In fact, Union’s last two wins over the Tigers came on the road.

While it is winless, Campbellsville has faced stiff competition, losing to No. 12 Lindsey Wilson College (40-24) and No. 8 Reinhardt University (28-0).

Three quarterbacks have combined for 297 yards passing and one touchdown. Kendon Young is the Tigers top receiver with 10 catches for 122 yards.

Union is looking for its first rushing touchdown of the year.

The Bulldogs have six passing touchdowns with five of them going to Earl Wells. Wells has 17 catches on the year for 337 yards.

Defensively, Jay Brown and Cohen Perry lead the way with 25 and 18 tackles, respectively.

Photos by Danny Vaughn On the left, eighth-grader Rylee Foster catches pass from Cayden Grigsby for a huge gain. On... read more