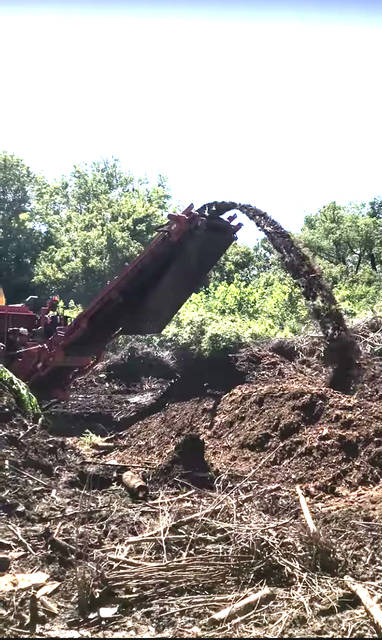 Street Department Superintendent Kevin Barnett reported Tuesday at the Middlesboro City Council meeting that the grinder is producing enough from the limbs and brush that they are averaging 12 tractor trailer loads of chips and material daily. Pictured is the grinder that was the topic of discussion.

At the Middlesboro City Council meeting Tuesday night, department reports were given by all department heads. Superintendent of the street department Kevin Barnett gave the council several updates on work being done by his department.

“The grinder has finished up at the limb pile, and it was a success,” Barnett reported. “They cleaned up about 60% of it and it is unreal what they got done.”

He explained that it is unreal to see what the grinder can produce in the short amount of time.

“Brooks Furniture in Tazewell is hauling it off for us for free and not charging us anything,” he said.” They are averaging about 12 tractor trailer loads a day.”

Barnett wanted to extend a thank you to the Bell County Fiscal Court for letting the street Department use their loader.

“All we have to do is have our operator out there and pay for the fuel and that is working out really good,” he said.

“They send four trucks and they make three rounds,” Barnett responded. “That’s what they have been averaging. Monday they had to work on their trucks, but they are averaging 12 loads a day.”

Nelson asked how many more days he thought it would take before they have the limb pile completely cleaned up.

“You just need to go look at it at how many piles there are and how high they are,” Barnett said. “That’s a good thing because we’ve been handling it better now.”

Barnett reported that the street department is now utilizing a time clock, but they are still using time sheets to make sure that everything matches up. He also reported that the “Parks Closed” signs are placed at all five parks to give the police department added assistance when it comes to keeping people out during those closed times.

Nelson wanted Barnett to know that he was contacted by First State Bank about financing the equipment that Barnett requested for the road department.

“They have agreed to finance the equipment that you requested, which was the sewer clean out and the chipper at 3.4% and they’ve eliminated all fees except one fee,” Nelson explained. “Our payment would be about $1,700 a month for five years, and we can use some of the sewer money to pay for that since it’s for the sewer.”

Barnett followed up with reporting that the street department has filled in drop-offs at Southside Park near the basketball court as well as spots at Fords Woods Park.

“Boone has been doing unbelievable work out there picking up trash and digging grass out from around the court so we leveled the drop offs up,” he said. “So, we met with him and hauled maybe 10 or 15 loads up to Fords Woods Park where there were a bunch of sink holes. We worked and got all that cleaned up.”

Mayor Nelson asked how much longer the grass season was expected to last because once it ended, crews could be utilized in other area. Barnett responded that as long as it stays warm, they don’t know what to expect.

Barnett also reported that at the horseshoe park, there are two picnic tables and three grills that have never been used.

“If we get time this fall, we’d like to dig them up and maybe take them to Southside Park to get some use out of them,” he said. “We’ve never seen anyone use the horseshoe park over there and I think it’s a waste of good equipment.”

The next Middlesboro City Council work session will be on Oct. 8 at 6 p.m. and the regular Council meeting will be Oct. 15 at 7 p.m. The public is invited and encouraged to come and participate in these meetings.

Named one of the Top 20 Events in the Southeast by the Southeast Tourism Society, the White Lightning Trail Festival... read more