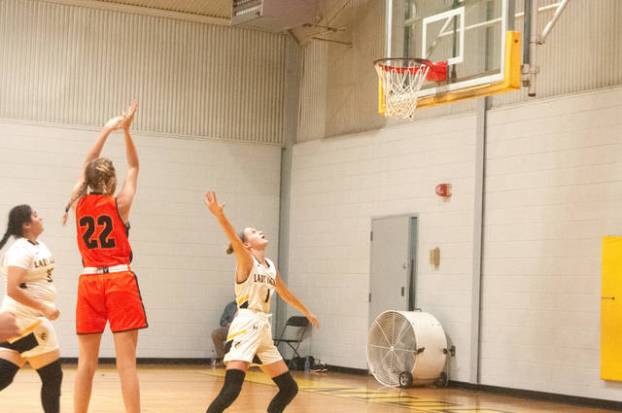 The Middlesboro middle school basketball team fell to Lynn Camp Tuesday night, 40-34. Led by Emrey Glover with 25 points, the Lady Jackets were unable to hold on to the lead late in the game.

Brynlee Foster followed Glover with six points. Aieza Ahmad had two points and Kaylee Lawson had one. Lynn Camp took advantage of their ability to score inside on Middlesboro by scoring a few buckets in the paint near the end of regulation, allowing them to pull away for a 40-34 victory.

“This is a very tough loss for us,” said Middlesboro coach Beth Evans. “We needed this win for our conference tournament seeding. It didn’t go our way, but I’m very proud of the way they fought tonight. They played their hearts out.”

“We started the game with two starters out due to injuries. Then we had another starter (Brynlee Foster) ejected for defending herself from punches thrown by a Lynn Camp player,” said Evans. “Losing a player of that caliber is always hard to come back from. I had to go to the bench early and play a lot of 5th and 6th-graders for the entire game. I thought my bench played hard. They really stepped up and worked hard.”

Glover got off to a good start for the Lady Jackets in the first period. Totaling seven of Middlesboro’s 12 points in the opening period, Glover was seemingly everywhere on both offense and defense throughout the game. Foster added a 3-pointer for the Lady Jackets and Ahmad added a two-point bucket, giving Middlesboro a 12-10 lead after one quarter.

The game sat at 15-15 until Middlesboro was able to connect on a lay-up after Glover grabbed her own rebound and was fouled in the process. With both teams struggling on offense, the Lady Jackets held a slim 19-18 lead over the Lady Wildcats at the half.

The flow of the game continued to go back-and-forth throughout the third period. Middlesboro outscored Lynn Camp by one point in the third to maintain a two-point lead heading into the final quarter, 29-27.

“I’m really proud of Emrey Glover,” said Evans. “She was the glue that held us together tonight. We just couldn’t finish it. Kaylee Lawson also played great defense tonight.

“We definitely need to work on our defense. We didn’t move our feet and allowed them to dribble right past us without stopping the ball — that can’t happen. Right now, we need to rest and heal up to prepare for our upcoming conference tournament.”

HARROGATE, Tenn. — The Lady Railsplitters are buzzing. Following a 3-0 week, which featured a pair of road wins versus... read more