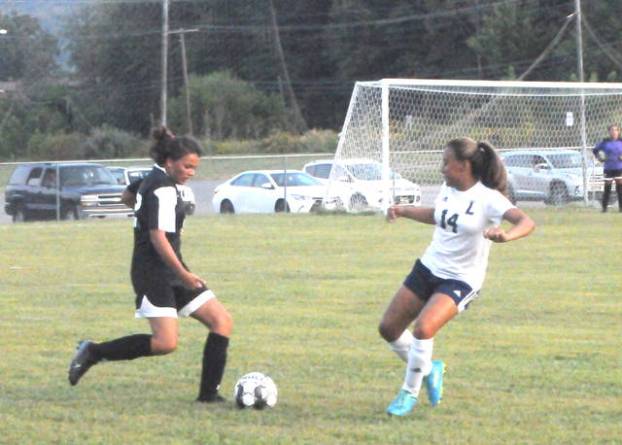 Haley Moyers attempts to pass the ball to a teammate around a Lakeway defender during Middlesboro’s 7-0 victory on Monday.

The Middlesboro Lady Jackets’ notched their second win of the season on Monday night at home against Lakeway Christian Academy, 7-0. Kayla James led the way for the Lady Jackets with three goals. Kaitlyn Benson continued her offensive consistency by netting two goals.

Madison Irvin aided the Lady Jackets’ effort with one goal. Emily Barnwell connected with the back of the net as well, adding one goal for Middlesboro.

James, Benson, Irvin and Barnwell all had one save each as well. Haley Moyers and Alexis Vanover added one assist each for the Lady Jackets. Keeper Jordyn Ferguson continues to be a very vocal leader from the box as well as continuing to play well. Ferguson had three saves against LCA, including a diving save on a penalty shot. In the game, Ferguson recorded her first shutout of the season.

“I’m proud of the way we played,” said Middlesboro coach Quinton Mason. “We’ve still got quite a few things we need to clean up. I feel like we play lazy, especially when we get a lead. We have to be better at winning the 50-50 balls. We stood around and watched way too much during this game. To be honest with you, we should have had a four or five goal lead at the half. Instead, we lead 2-0 because we were standing around watching the ball a lot in the first half.

“We did a much better job in the second half of the game. I’m very happy for Kayla James. As she goes, this team goes. So when she is playing loose and having fun, it helps the rest of the team play loose and have fun. This win does wonders for helping us build our confidence. Now we have seen, two games in a row, that we are capable of winning games. Winning is contagious and we hope we can keep it up. We’ve still got some work to do, but overall, I am very proud of the team.”

With the victory, the Lady Jackets improved to 2-6 on the season. Their seven goals against Lakeway exceeded their season total of five. Middlesboro travels to Letcher County Central on Wednesday to take on the Lady Cougars.

Rated Power Index (or RPI as many of us know it by) is nothing new in sports. When college basketball... read more