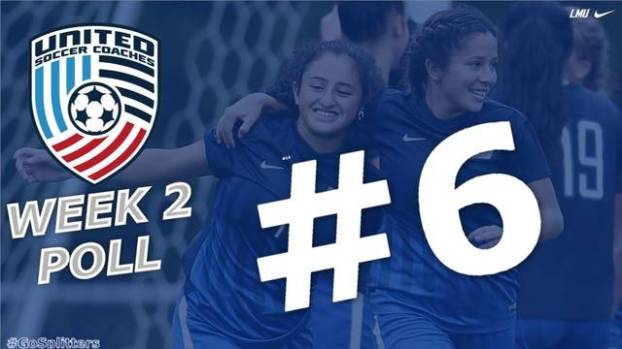 Following a 3-0 week, which featured a pair of road wins versus Georgia College and the University of West Georgia, the Lincoln Memorial University women’s soccer team has rose in the rankings to No. 6 in the latest United Soccer Coaches Top 25 Division II National Poll, which is the highest ranking in program history. The previous best was when the 2005 team was ranked No. 8 in the preseason poll.

LMU (4-0) came into the week one poll at No. 14 — after being selected No. 19 preseason — before moving up eight spots. The Lady Railsplitters are also atop the United Soccer Coaches Southeast Region Poll at No. 1, rising from No. 2 and surpassing Columbus State for the top overall spot.

“This stage of the year, it’s so hard to win two games in a row, especially when teams get that number next to their name,” LMU head coach Sean Fraser said. “Other teams see it and raise their game by 10 percent — that’s the biggest conversation we are having with the players.

“Obviously, at this stage of the season it’s a factor…so that’s been in conversation that we want to be higher than that and just stick to the process. We’ve had a good start; we are enjoying it.”

Playing one game at a time has been the Lady Railsplitters’ M.O., and it isn’t going to change as they head into South Atlantic Conference play against rival Carson-Newman at 5 p.m. Wednesday in Jefferson City, Tenn.

It’ll be LMU’s third match on the Eagles’ field since November as the Lady Railsplitters defeated Lander and host Carson-Newman for a place in the Southeast Regional Championship less than a year ago.

After losing to the Eagles five straight times, LMU broke the streak in the SAC Tournament, knocking off C-N for the title, and then beating the Eagles again in penalty-kick, shoot-out fashion to advance to the Sweet 16.

The Lady Railsplitters are expecting the environment to be nothing less than intense when they return to the Eagles’ field Wednesday, but they are going to feed off of it and just going to keep doing what they’ve been doing.

“We talk tactically; we talk technically but we also talk about mentality,” Fraser said. “They need to approach the Carson-Newman game with the same emotion they would approach Coker or Chowan. We can’t build it up too big. We have to think about the long term — the next game after that, the next game after that. It’s tough to do, but we are excited to play.

“We are excited we are winning and excited the stuff we are doing on the practice field seems to be working. We are excited the brand of soccer we have is fun to watch and fun to be a part of. This has been an evolution for two recruiting classes now — that’s the rewarding part.”

The Middlesboro Lady Jackets’ notched their second win of the season on Monday night at home against Lakeway Christian Academy,... read more