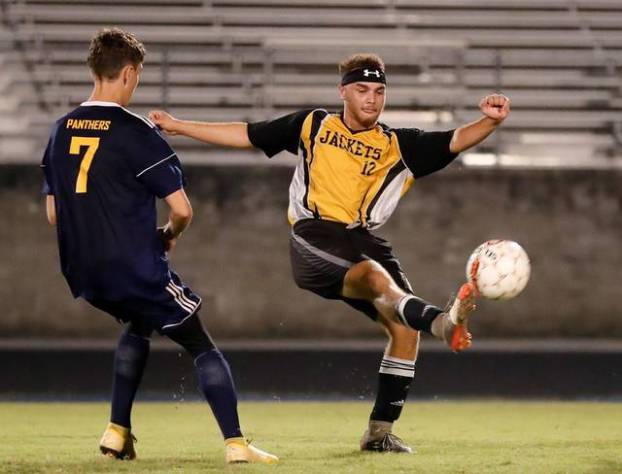 Tyshawn Simpson clears the ball out for Middlesboro in their 1-0 victory over Knox Central on Thursday night.

The Middlesboro Yellow Jackets continued their success on the soccer field Thursday night as they took out the Knox Central Panthers 1-0 on the road.

Middlesboro’s lone loss this season came by way of a forfeit to Oneida Baptist Institute on Aug. 31. Outside of the forfeit, the Yellow Jackets have won all four of the games they’ve played. They’re outscoring their opponents 17-3 and have defeated Knox Central already in two of their four scheduled matchups this season.

“I was really proud of the way we played,” said Middlesboro coach Tim Millett. “We came out attacking a lot and it really helped us get going. We played fast and under control, which helped us be effective at every area of the field.”

“We’ve been doing a great job on defense especially all season. We’ve not allowed too many goals so far, but we are also playing well in the offensive end of the field. I think we are moving the ball well, and we are doing a good job of working as a team. I think it’s really starting to show.

“Knox Central is a really good team. They’re coached well, they always play well and they have a bunch of great athletes. It seems like every time we play them, it’s decided by one or two goals. It’s always a competitive game and always a very fun one to coach. They’re a good team, and for us to beat them shows us that we are doing the right things.”

With the victory, Middlesboro improved to 4-1 on the season. The Yellow Jackets will be back in action on Sept. 17 on the road in Whitley County at 6 p.m.

Two days after falling to the Lady Panthers on senior night at home, the Lady Jackets exacted their revenge on... read more