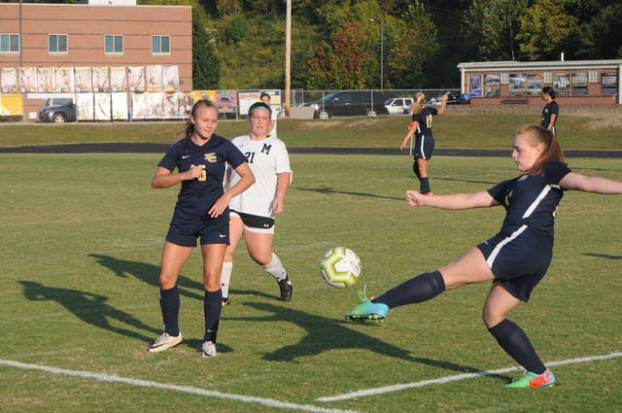 A Knox Central player attempts to keep the ball inbounds in Thursday’s match-up between the Lady Panthers and the Lady Jackets.

Two days after falling to the Lady Panthers on senior night at home, the Lady Jackets exacted their revenge on Thursday night, downing Knox Central 2-1 at James H. Hampton stadium at Knox Central.

Kaitlyn Benson continues to lead the Lady Jacket offense. Against Knox Central, Benson added both goals for Middlesboro on assists from Madison Irvin and Emily Barnwell. Keeper Jordyn Ferguson was credited with 14 saves and only one goal allowed.

“I saw a lot more heart out of our team tonight,” said Middlesboro coach Quinton Mason. “We didn’t play for just 60 minutes, we played for 80. I am extremely proud of this bunch of girls. Fundamentally and technically we got much better, especially in the middle of the field.”

“Madison Irvin played a whale of a game,” said Mason. “She played with her head instead of her emotions during this game and played very well. We played good soccer during this game. Jordyn Ferguson has been doing a great job for us. She has some growing and stuff to go, like all of us, but she’s amazing and she’s one of the best I’ve ever coached.

“This win tells our team that we can do this. We just lost to this same team two days ago. For them to come out and respond, it shows our team that we are good enough to play with anyone. It’s taken me half of a season to get everyone in positions that I know they play the best.

“These girls don’t care where they play, as long as the team wins. As the season progresses, our team chemistry gets much better. At the beginning, it was more of an individual effort, whereas, now we are starting to see more cohesion and chemistry. Chemistry is a huge deal. We are very pleased with the victory and how we played this game.”

With their first win of the season, the Lady Jackets improve to 1-6. Middlesboro will be back in action on Sept. 16 at home against Lakeway Christian Academy at 6:30 p.m.

The countywide All-Decade Team…kind of

When I first came to the Middlesboro Daily News in 2011 I had the ambition to one day cover sports.... read more